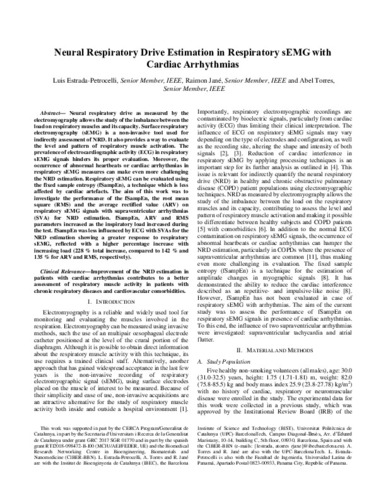 Except where otherwise noted, content on this work is licensed under a Creative Commons license : Attribution-NonCommercial-NoDerivs 3.0 Spain
Abstract
Neural respiratory drive as measured by the electromyography allows the study of the imbalance between the load on respiratory muscles and its capacity. Surface respiratory electromyography (sEMG) is a non-invasive tool used for indirectly assessment of NRD. It also provides a way to evaluate the level and pattern of respiratory muscle activation. The prevalence of electrocardiographic activity (ECG) in respiratory sEMG signals hinders its proper evaluation. Moreover, the occurrence of abnormal heartbeats or cardiac arrhythmias in respiratory sEMG measures can make even more challenging the NRD estimation. Respiratory sEMG can be evaluated using the fixed sample entropy (fSampEn), a technique which is less affected by cardiac artefacts. The aim of this work was to investigate the performance of the fSampEn, the root mean square (RMS) and the average rectified value (ARV) on respiratory sEMG signals with supraventricular arrhythmias (SVA) for NRD estimation. fSampEn, ARV and RMS parameters increased as the inspiratory load increased during the test. fSampEn was less influenced by ECG with SVAs for the NRD estimation showing a greater response to respiratory sEMG, reflected with a higher percentage increase with increasing load (228 % total increase, compared to 142 % and 135 % for ARV and RMS, respectively).
Description
© 2020 IEEE. Personal use of this material is permitted. Permission from IEEE must be obtained for all other uses, in any current or future media, including reprinting /republishing this material for advertising or promotional purposes, creating new collective works, for resale or redistribution to servers or lists, or reuse of any copyrighted component of this work in other works
CitationEstrada, L.; Jane, R.; Torres, A. Neural respiratory drive estimation in respiratory sEMG with cardiac arrhythmias. A: Annual International Conference of the IEEE Engineering in Medicine and Biology Society. "EMBC'20: 42nd Annual International Conferences of the IEEE Engineering in Medicine and Biology Society: 20-24 July 2020: Montreal, Canada". Institute of Electrical and Electronics Engineers (IEEE), 2020, p. 2748-2751. ISBN 978-1-7281-1991-5. DOI 10.1109/EMBC44109.2020.9176377.
URIhttp://hdl.handle.net/2117/341615
DOI10.1109/EMBC44109.2020.9176377
ISBN978-1-7281-1991-5
Publisher versionhttps://ieeexplore.ieee.org/document/9176377
Collections
Share: