Improving object detection in paintings based on time contexts 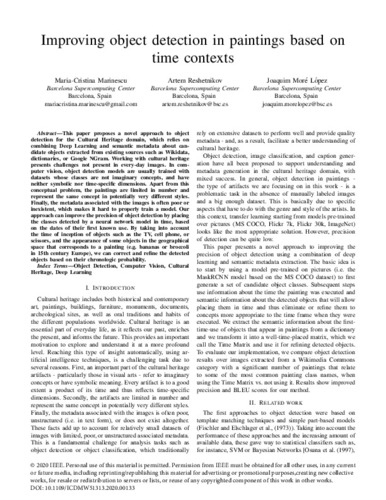 Reshetnikov, Artem
More López, Joaquim
Tipo de documentoTexto en actas de congreso
EditorInstitute of Electrical and Electronics Engineers (IEEE)
Condiciones de accesoAcceso abierto
Resumen
This paper proposes a novel approach to object detection for the Cultural Heritage domain, which relies on combining Deep Learning and semantic metadata about candidate objects extracted from existing sources such as Wikidata, dictionaries, or Google NGram. Working with cultural heritage presents challenges not present in every-day images. In computer vision, object detection models are usually trained with datasets whose classes are not imaginary concepts, and have neither symbolic nor time-specific dimensions. Apart from this conceptual problem, the paintings are limited in number and represent the same concept in potentially very different styles. Finally, the metadata associated with the images is often poor or inexistent, which makes it hard to properly train a model. Our approach can improve the precision of object detection by placing the classes detected by a neural network model in time, based on the dates of their first known use. By taking into account the time of inception of objects such as the TV, cell phone, or scissors, and the appearance of some objects in the geographical space that corresponds to a painting (e.g. bananas or broccoli in 15th century Europe), we can correct and refine the detected objects based on their chronologic probability.
CitaciónMarinescu, M.; Reshetnikov, A.; More, J. Improving object detection in paintings based on time contexts. A: IEEE International Conference On Data Mining. "20th IEEE International Conference on Data Mining Workshops: 17-20 November 2020, virtual conference: proceedings". Institute of Electrical and Electronics Engineers (IEEE), 2020, p. 926-932. ISBN 978-1-7281-9012-9. DOI 10.1109/ICDMW51313.2020.00133.
URIhttp://hdl.handle.net/2117/341517
DOI10.1109/ICDMW51313.2020.00133
ISBN978-1-7281-9012-9
Versión del editorhttps://ieeexplore.ieee.org/document/9346513
Colecciones
Comparte: