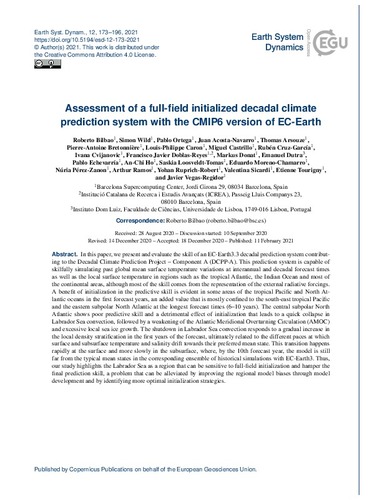 Except where otherwise noted, content on this work is licensed under a Creative Commons license : Attribution 3.0 Spain
ProjectEUCP - European Climate Prediction system (EC-H2020-776613)
APPLICATE - Advanced Prediction in Polar regions and beyond: Modelling, observing system design and LInkages associated with ArctiC ClimATE change (EC-H2020-727862)
PRIMAVERA - PRocess-based climate sIMulation: AdVances in high resolution modelling and European climate Risk Assessment (EC-H2020-641727)
INTAROS - Integrated Arctic observation system (EC-H2020-727890)
INADEC - Impacts of the North Atlantic Decadal variability on European Climate: mechanisms and predictability (EC-H2020-800154)
SPFireSD - Seasonal Prediction of Fire danger using Statistical and Dynamical models (EC-H2020-748750)
STARS - SupercompuTing And Related applicationS Fellows Program (EC-H2020-754433)
Abstract
In this paper, we present and evaluate the skill of an EC-Earth3.3 decadal prediction system contributing to the Decadal Climate Prediction Project – Component A (DCPP-A). This prediction system is capable of skilfully simulating past global mean surface temperature variations at interannual and decadal forecast times as well as the local surface temperature in regions such as the tropical Atlantic, the Indian Ocean and most of the continental areas, although most of the skill comes from the representation of the external radiative forcings. A benefit of initialization in the predictive skill is evident in some areas of the tropical Pacific and North Atlantic oceans in the first forecast years, an added value that is mostly confined to the south-east tropical Pacific and the eastern subpolar North Atlantic at the longest forecast times (6–10 years). The central subpolar North Atlantic shows poor predictive skill and a detrimental effect of initialization that leads to a quick collapse in Labrador Sea convection, followed by a weakening of the Atlantic Meridional Overturning Circulation (AMOC) and excessive local sea ice growth. The shutdown in Labrador Sea convection responds to a gradual increase in the local density stratification in the first years of the forecast, ultimately related to the different paces at which surface and subsurface temperature and salinity drift towards their preferred mean state. This transition happens rapidly at the surface and more slowly in the subsurface, where, by the 10th forecast year, the model is still far from the typical mean states in the corresponding ensemble of historical simulations with EC-Earth3. Thus, our study highlights the Labrador Sea as a region that can be sensitive to full-field initialization and hamper the final prediction skill, a problem that can be alleviated by improving the regional model biases through model development and by identifying more optimal initialization strategies.
Related documenthttps://esd.copernicus.org/articles/12/173/2021/esd-12-173-2021-supplement.pdf
CitationBilbao, R. [et al.]. Assessment of a full-field initialized decadal climate prediction system with the CMIP6 version of EC-Earth. "Earth System Dynamics", 2021, vol. 12, p. 173-196.
URIhttp://hdl.handle.net/2117/341413
DOI10.5194/esd-12-173-2021
ISSN2190-4979
Publisher versionhttps://esd.copernicus.org/articles/12/173/2021/
Collections
Share: