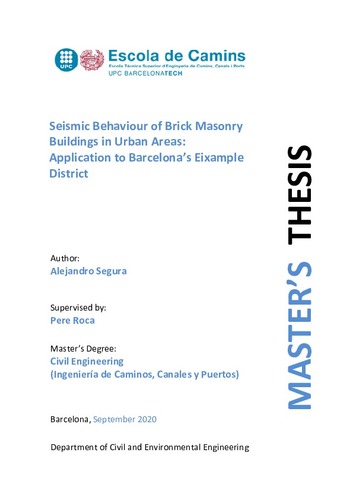 Document typeMaster thesis
Rights accessOpen Access
Abstract
Unreinforced brick masonry buildings are known for their seismic vulnerability, which makes them prone to failure even in areas with low to moderate seismic hazard. This is the case of Barcelona's Eixample district, which concentrates a great number of such buildings in a very densely populated area, which were not built with proper seismic-proof measures. The present thesis studies the local failures of brick masonry buildings through possible collapse mechanisms, an approach that realistically reflects the behaviour of this type of structures. Due to the regularity of the Eixample district, it is possible to apply this analysis to buildings with different geometries, typologies and position within the city blocks. Both out-of-plane and in-plane collapse modes are formulated and evaluated, as well as those resulting from the interaction between adjacent structures within the same block. The safety of the buildings against earthquakes proves to be strongly dependent on the geometry and type of collapse mode. Despite an overall remarkably safe behaviour of the buildings for a seismic event with a return period of 475 years, the weakest of the walls might still sustain severe damage and in a few cases even collapse.
SubjectsEarthquake engineering, Buildings -- Earthquake effects, Enginyeria sísmica, Edificis -- Efecte dels terratrèmols
DegreeTitulació
URIhttp://hdl.handle.net/2117/341152
Collections
Share: