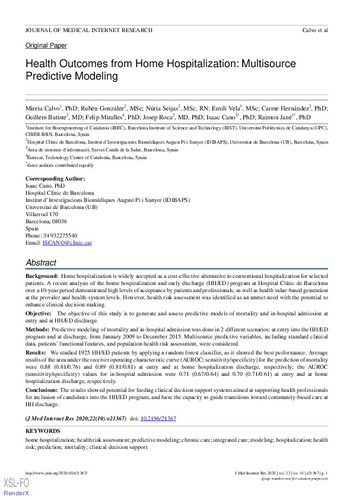 Document typeArticle
PublisherJMIR
Rights accessOpen Access
Abstract
Background: Home hospitalization is widely accepted as a cost-effective alternative to conventional hospitalization for selected patients. A recent analysis of the home hospitalization and early discharge (HH/ED) program at Hospital Clínic de Barcelona over a 10-year period demonstrated high levels of acceptance by patients and professionals, as well as health value-based generation at the provider and health-system levels. However, health risk assessment was identified as an unmet need with the potential to enhance clinical decision making. Objective: The objective of this study is to generate and assess predictive models of mortality and in-hospital admission at entry and at HH/ED discharge. Methods: Predictive modeling of mortality and in-hospital admission was done in 2 different scenarios: at entry into the HH/ED program and at discharge, from January 2009 to December 2015. Multisource predictive variables, including standard clinical data, patients’ functional features, and population health risk assessment, were considered. Results: We studied 1925 HH/ED patients by applying a random forest classifier, as it showed the best performance. Average results of the area under the receiver operating characteristic curve (AUROC; sensitivity/specificity) for the prediction of mortality were 0.88 (0.81/0.76) and 0.89 (0.81/0.81) at entry and at home hospitalization discharge, respectively; the AUROC (sensitivity/specificity) values for in-hospital admission were 0.71 (0.67/0.64) and 0.70 (0.71/0.61) at entry and at home hospitalization discharge, respectively. Conclusions: The results showed potential for feeding clinical decision support systems aimed at supporting health professionals for inclusion of candidates into the HH/ED program, and have the capacity to guide transitions toward community-based care at HH discharge.
CitationCalvo, M. [et al.]. Health outcomes from home hospitalization: multisource predictive modeling. "Journal of medical internet research", 7 Octubre 2020, vol. 22, núm. 10, p. e21367/1-e21367/10.
URIhttp://hdl.handle.net/2117/341077
DOI10.2196/21367
ISSN1438-8871
Publisher versionhttps://www.jmir.org/2020/10/e21367/
Collections
Share: