Supermanzana in Practice: Ability to Create People Friendly Spaces upon the Example of Selected Barcelona-Based Projects 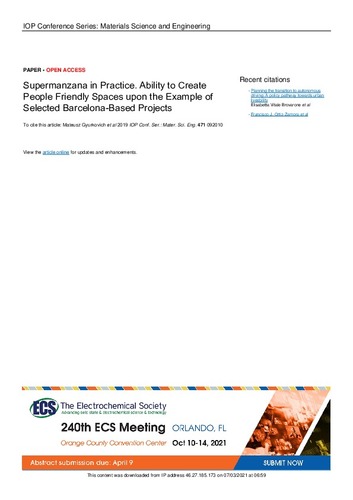 Document typeArticle
PublisherInstitute of Physics (IOP)
Rights accessOpen Access
Abstract
This paper is a result of an in situ study carried out in September 2017 in Barcelona. Its objective was to assess the effectiveness of the spatial policy of the city in terms of promoting sustainable mobility, traffic restrictions, increasing the share of public spaces, and improving basic ecological indicators, such as biodiversity, the area of green spaces, or air pollution. The analysis focuses on measures implemented within the scheme of the concept of 'a superblock' (original 'supermanzana') on the example of two selected neighborhoodsof Barcelona: Gracia, and a part of El Poblenou, demarcated by the streets: Carrer de Badajoz, Carrer de Llacuna, Carrer de Tanger, Carrer de Pallars. Special attention was paid to the ability of the changes implemented to create people friendly spaces, where people wish to stay, and subsequently to their ability to create positive functional and spatial changes, especially on ground floors of buildings. The paper shall give the reader a sense of the exact scope of implemented measures, presented on the example of selected analytical layers, such as transport, public spaces, visual information, street furniture, etc. The study results demonstrate an improvement in terms of the majority of the urban and ecological indicators referred to above; nevertheless, the assessment in terms of the actual increase of the attractiveness of the place and its ability to create people friendly spaces, is not explicit. In El Poblenou in particular one can observe certain weaknesses in this respect, which could be particularly disturbing considering subsequent plans of the authorities of Barcelona to implement the concept of 'a superblock' in other parts of the city within the scheme of the urban grid of Eixample. Doubts are additionally raised by the legibility of the new traffic network in this location, which constitutes an impediment in uninhibited and intuitive moving around for city inhabitants themselves. A similar spectrum of measures does not always bring about the same results. The assessment of the quality of public space cannot be limited to some selected figures, which confirm – as they must – effective implementation of the assumed goals, much to the satisfaction of the authorities who are behind them. Such an assessment carried out independently from other placemaking factors, such as the plot ratio, the diversity of the functional programme, spatial relations in the existing development structure, which should be adjusted to man's scale, or – finally - the quality and character of greenery projects implemented, will never be credible.
Location
1: Carrer de Tànger, 93, 08018 Barcelona, Espanya
CitationGyurkovich, M.; Poklewski-Koziell, D.; Marmolejo, C. Supermanzana in Practice: Ability to Create People Friendly Spaces upon the Example of Selected Barcelona-Based Projects. "IOP Conference Series: Materials Science and Engineering", 2019, vol. 471, núm. 9, p. 1-10.
URIhttp://hdl.handle.net/2117/341066
DOI10.1088/1757-899X/471/9/092010
ISSN1757-8981
Publisher versionhttps://iopscience.iop.org/article/10.1088/1757-899X/471/9/092010
Collections
Share: