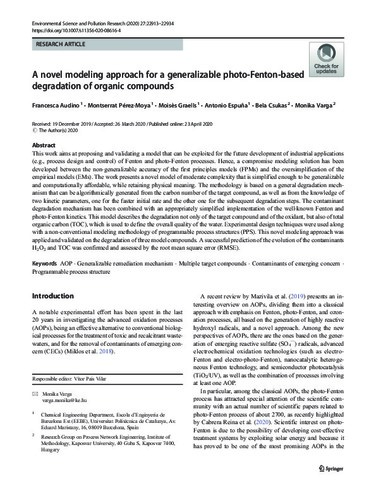 Except where otherwise noted, content on this work is licensed under a Creative Commons license : Attribution-NonCommercial-NoDerivs 3.0 Spain
Abstract
This work aims at proposing and validating a model that can be exploited for the future development of industrial applications (e.g., process design and control) of Fenton and photo-Fenton processes. Hence, a compromise modeling solution has been developed between the non-generalizable accuracy of the first principles models (FPMs) and the oversimplification of the empirical models (EMs). The work presents a novel model of moderate complexity that is simplified enough to be generalizable and computationally affordable, while retaining physical meaning. The methodology is based on a general degradation mechanism that can be algorithmically generated from the carbon number of the target compound, as well as from the knowledge of two kinetic parameters, one for the faster initial rate and the other one for the subsequent degradation steps. The contaminant degradation mechanism has been combined with an appropriately simplified implementation of the well-known Fenton and photo-Fenton kinetics. This model describes the degradation not only of the target compound and of the oxidant, but also of total organic carbon (TOC), which is used to define the overall quality of the water. Experimental design techniques were used along with a non-conventional modeling methodology of programmable process structures (PPS). This novel modeling approach was applied and validated on the degradation of three model compounds. A successful prediction of the evolution of the contaminants H2O2 and TOC was confirmed and assessed by the root mean square error (RMSE).
CitationAudino, F. [et al.]. A novel modeling approach for a generalizable photo-Fenton-based degradation of organic compounds. "Environmental science and pollution research", 23 Abril 2020, núm. 27, p. 22913-22934.
URIhttp://hdl.handle.net/2117/341009
DOI10.1007/s11356-020-08616-4
ISSN0944-1344
Publisher versionhttps://link.springer.com/article/10.1007/s11356-020-08616-4
Collections
Share: