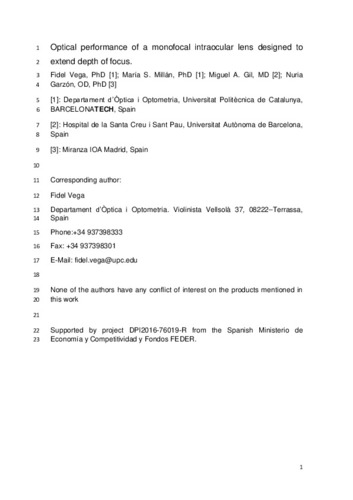 Garzón Jimenez, Nuria
Document typeArticle
Rights accessOpen Access
All rights reserved. This work is protected by the corresponding intellectual and industrial property rights. Without prejudice to any existing legal exemptions, reproduction, distribution, public communication or transformation of this work are prohibited without permission of the copyright holder
Abstract
Purpose: To test the performance of a new monofocal intraocular lens, intended to extend depth of focus (Tecnis Eyhance, ICB00; Johnson & Johnson Vision, Inc) (ICB-IOL), in comparison to a standard monofocal IOL (Tecnis 1-piece, ZCB00; Johnson & Johnson Vision, Inc) (ZCB-IOL) of the same platform and material. Methods: Assessment of the optical performance of the two IOLs was made in vitro using an optical test bench with a model eye. The spherical aberration, modulation transfer function (MTF), and area under the MTF (MTFa) were obtained for pupil sizes ranging from 2 to 5 mm. Through-focus MTFa curves between -3.00 and +1.00 diopters (D) were obtained with three pupil sizes (2, 3, and 4.5 mm). Halo formation was also assessed for both lenses. Results: The ICB-IOL had slightly worse optical quality at its best focus (ie, lower MTF scores at distance vision) and more negative spherical aberration than the ZCB-IOL for pupils ranging from 2 to 3 mm. The maximum of the through-focus MTFa curve of the ICB-IOL with a 2-mm pupil shifted to a myopic defocus of -0.50 D. For larger pupils (= 3.5 mm), there were no differences in spherical aberration, MTF scores, and halo energy between the two lenses. Conclusions: The new ICB-IOL is a modified monofocal lens with 0.50 D of additional power in its central 2-mm zone and more negative spherical aberration values, which induce a myopic shift of the maximum of optical quality and could improve intermediate vision. For pupils larger than 3.5 mm, there were no differences between IOLs. The new ICB-IOL design would produce photic phenomena comparable to a standard IOL.
CitationVega, F. [et al.]. Optical performance of a monofocal intraocular lens designed to extend depth of focus. "Journal of refractive surgery", 1 Setembre 2020, vol. 36, núm. 9, p. 625-632.
URIhttp://hdl.handle.net/2117/340933
DOI10.3928/1081597X-20200710-01
ISSN1081-597X
Publisher versionhttps://pubmed.ncbi.nlm.nih.gov/32901831/
Collections
Share: