Does the trihydrate of atorvastatin calcium possess a melting point? 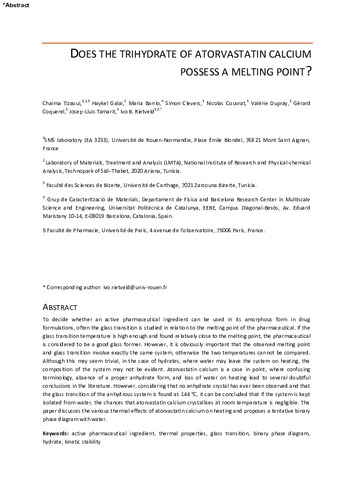 Rietveld, Ivo B.
Document typeArticle
Rights accessOpen Access
Abstract
To decide whether an active pharmaceutical ingredient can be used in its amorphous form in drug formulations, often the glass transition is studied in relation to the melting point of the pharmaceutical. If the glass transition temperature is high enough and found relatively close to the melting point, the pharmaceutical is considered to be a good glass former. However, it is obviously important that the observed melting point and glass transition involve exactly the same system, otherwise the two temperatures cannot be compared. Although this may seem trivial, in the case of hydrates, where water may leave the system on heating, the composition of the system may not be evident. Atorvastatin calcium is a case in point, where confusing terminology, absence of a proper anhydrate form, and loss of water on heating lead to several doubtful conclusions in the literature. However, considering that no anhydrate crystal has ever been observed and that the glass transition of the anhydrous system is found at 144 °C, it can be concluded that if the system is kept isolated from water, the chances that atorvastatin calcium crystallises at room temperature is negligible. The paper discusses the various thermal effects of atorvastatin calcium on heating and proposes a tentative binary phase diagram with water.
CitationDel Barrio, M. [et al.]. Does the trihydrate of atorvastatin calcium possess a melting point? "European journal of pharmaceutical sciences", 30 Maig 2020, vol. 148, p. 105334:1-105334:10.
URIhttp://hdl.handle.net/2117/340854
DOI10.1016/j.ejps.2020.105334
ISSN0928-0987
Publisher versionhttps://www.sciencedirect.com/science/article/abs/pii/S0928098720301238
Collections
Share: