The phase relationship between the pyrazinamide polymorphs a and y 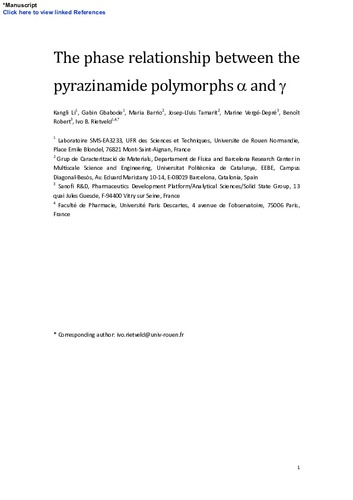 Document typeArticle
Rights accessOpen Access
Abstract
Pyrazinamide is an active pharmaceutical compound for the treatment of tuberculosis. It possesses at least four crystalline polymorphs. Polymorphism may cause solubility problems as the case of ritonavir has clearly demonstrated; however, polymorphs also provide opportunities to improve pharmaceutical formulations, in particular if the stable form is not very soluble. The four polymorphs of pyrazinamide constitute a rich system to investigate the usefulness of metastable forms and their stabilization. However, despite the existence of a number of papers on the polymorphism of pyrazinamide, well-defined equilibrium conditions between the polymorphs appear to be lacking. The main objectives of this paper are to establish the temperature and pressure equilibrium conditions between the so-called a and ¿ polymorphs of pyrazinamide, its liquid phase, and vapor phase and to determine the phase-change inequalities, such as enthalpies, entropies, and volume differences. The equilibrium temperature between a and ¿ was experimentally found at 392(1) K. Moreover, vapor pressures and solubilities of both phases have been determined, clearly indicating that form a is the more stable form at room temperature. High-pressure thermal analysis and the topological pressure–temperature phase diagram demonstrate that the ¿ form is stabilized by pressure and becomes stable at room temperature under a pressure of 260 MPa.
CitationDel Barrio, M.; Tamarit, J.L. The phase relationship between the pyrazinamide polymorphs a and y. "International journal of pharmaceutics", 30 Abril 2020, vol. 580, p. 119230:1-119230:11.
URIhttp://hdl.handle.net/2117/340839
DOI10.1016/j.ijpharm.2020.119230
ISSN0378-5173
Publisher versionhttps://www.sciencedirect.com/science/article/pii/S0378517320302143
Collections
Share: