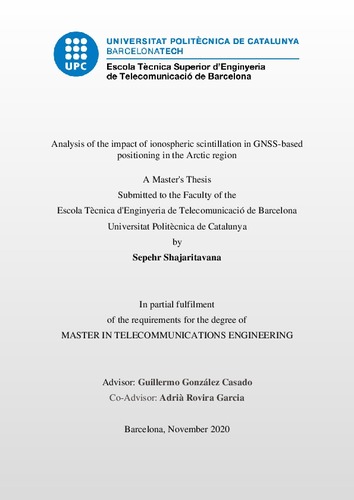 Document typeMaster thesis
Rights accessOpen Access
Abstract
As the world becomes more complex rapidly having a smart infrastructure is a necessity to be able to manage them remotely by high accuracy. In order to cope with this issue we need to have precise navigation globally which could be challenging in high- and low latitudes then the focus here is on six GNSS (Global Navigation Satellite System) receivers in the arctic region (high latitude) with GLONASS and GPS constellations. The impact of ionospheric scintillation has been characterized based on Sigma Phi, AATR and ROTI, using a database of one year of data in 2014. The thresholds from cumulative distribution function (CDF) of those scintillation parameters at 99% and 99.9% for each station per constellation have been extracted and high scintillation events were detected. The 1-CDF plots of December and July were compared and the seasonal Sigma Phi evolution has been analyzed for different stations per constellation. Moreover the linear correlation between ROTI and Sigma Phi was observed. These correlation indexes highly depend on type of the receiver, location of the receiver and the type of constellation used which will help us to differentiate between the level or impact of scintillation measured for different receivers per constellation. The scintillation events are observed to depend generally on the location of the receiver, period of the day, performance of the receiver, satellite constellation, and ionosphere behaviour. In addition, the impact of data loss in the database analysed has been shown to be relevant and different from station to station. Finally, single frequency PPP could have a higher convergence time in comparison with double frequency PPP according to a preliminary study. Hence, a detailed future work to investigate this issue is proposed.
SubjectsGlobal Navigation Satellite System, Sistema de posicionament global
DegreeMÀSTER UNIVERSITARI EN ENGINYERIA DE TELECOMUNICACIÓ (Pla 2013)
URIhttp://hdl.handle.net/2117/340627
Collections
Share: