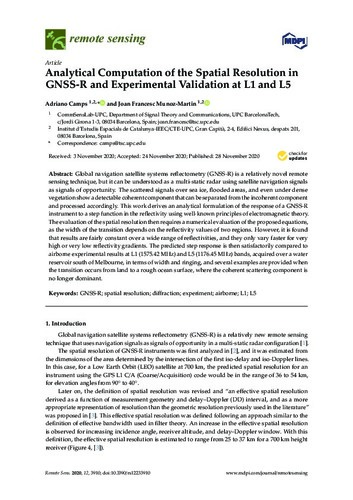 Document typeArticle
PublisherMultidisciplinary Digital Publishing Institute (MDPI)
Rights accessOpen Access
Abstract
Global navigation satellite systems reflectometry (GNSS-R) is a relatively novel remote sensing technique, but it can be understood as a multi-static radar using satellite navigation signals as signals of opportunity. The scattered signals over sea ice, flooded areas, and even under dense vegetation show a detectable coherent component that can be separated from the incoherent component and processed accordingly. This work derives an analytical formulation of the response of a GNSS-R instrument to a step function in the reflectivity using well-known principles of electromagnetic theory. The evaluation of the spatial resolution then requires a numerical evaluation of the proposed equations, as the width of the transition depends on the reflectivity values of two regions. However, it is found that results are fairly constant over a wide range of reflectivities, and they only vary faster for very high or very low reflectivity gradients. The predicted step response is then satisfactorily compared to airborne experimental results at L1 (1575.42 MHz) and L5 (1176.45 MHz) bands, acquired over a water reservoir south of Melbourne, in terms of width and ringing, and several examples are provided when the transition occurs from land to a rough ocean surface, where the coherent scattering component is no longer dominant.
CitationCamps, A.; Muñoz, J. Analytical computation of the spatial resolution in GNSS-R and experimental validation at L1 and L5. "Remote sensing", 28 Novembre 2020, vol. 12, núm. 23, article 3910, p. 1-15.
URIhttp://hdl.handle.net/2117/340621
DOI10.3390/rs12233910
ISSN2072-4292
Publisher versionhttps://www.mdpi.com/2072-4292/12/23/3910
Collections
Share: