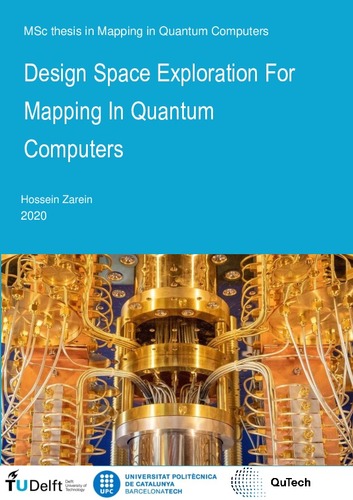 ; García Almudéver, Carmen
CovenanteeTechnische Universiteit Delft
Document typeMaster thesis
Rights accessOpen Access
All rights reserved. This work is protected by the corresponding intellectual and industrial property rights. Without prejudice to any existing legal exemptions, reproduction, distribution, public communication or transformation of this work are prohibited without permission of the copyright holder
Abstract
Quantum computers have emerged as an alternative computer paradigm that will allow to solve some complex problems of large numbers that are not tractable for classical computers, e.g. factorization. Quantum computers also have the ability to simulate quantum mechanics in a real and direct way. The development of quantum computers faces many unique obstacles. In recent years, various quantum computer prototypes have been created by com- panies such as Google and IBM, on which we can run some quantum algorithms. But these prototypes are far from the quantum computers we envision and can function like today?s classical computers. It is said that we are in the time of Noisy Intermediate-Scale Quantum (NISQ) computers. This means that current quantum computers are very noisy and their size is very small compared to classical comput- ers. The challenge with small, noisy quantum devices running quantum algorithms is that due to the hardware limitations they face which must be respected, quantum algorithm needs to be modified before their execution on quantum devices. To solve this problem in quantum computers, a mapping process is needed, which is part of the compilation step that modifies the quantum algorithms to take into account all the limitations of the targeted quantum device. After mapping process, the resulting quantum circuit usually has a higher number of gates and (execution time) latency, decreasing the algorithm?s reliability. Different mapping solutions have been already proposed. Most of them are meant for a specific quan- tum processor and different in methodology, approach and features. In addition, they are usually only compared in terms of added gates (gate overhead) or added circuit execution time (latency overhead). No thorough comparative analysis of the different mapping solutions performance and features has been performed so far. In this thesis, we apply structured Design Space Exploration to the mapping of quantum circuits. By doing so, we will be able to have a deeper understanding of this process, make a thorough comparison of the mapper approaches and even develop optimized solutions for given applications and quantum devices. Moreover, we apply Design Space Exploration to the generation of quantum algorithms used as benchmarks and start to explore profiling them in a structured approach.
SubjectsQuantum computers, Algorithms, Ordinadors quàntics, Algorismes
URIhttp://hdl.handle.net/2117/340551
Collections
Share: