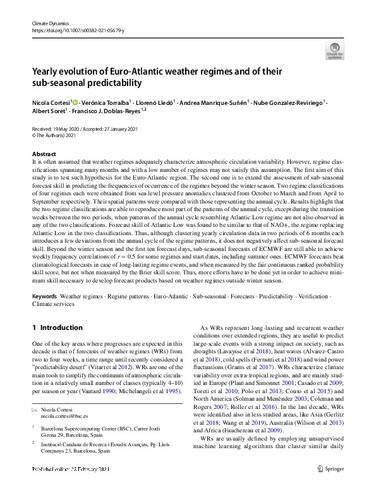 Document typeArticle
PublisherSpringer Link
Rights accessOpen Access
European Commission's projectS2S4E - Sub-seasonal to Seasonal climate forecasting for Energy (EC-H2020-776787)
Abstract
It is often assumed that weather regimes adequately characterize atmospheric circulation variability. However, regime classifications spanning many months and with a low number of regimes may not satisfy this assumption. The first aim of this study is to test such hypothesis for the Euro-Atlantic region. The second one is to extend the assessment of sub-seasonal forecast skill in predicting the frequencies of occurrence of the regimes beyond the winter season. Two regime classifications of four regimes each were obtained from sea level pressure anomalies clustered from October to March and from April to September respectively. Their spatial patterns were compared with those representing the annual cycle. Results highlight that the two regime classifications are able to reproduce most part of the patterns of the annual cycle, except during the transition weeks between the two periods, when patterns of the annual cycle resembling Atlantic Low regime are not also observed in any of the two classifications. Forecast skill of Atlantic Low was found to be similar to that of NAO+, the regime replacing Atlantic Low in the two classifications. Thus, although clustering yearly circulation data in two periods of 6 months each introduces a few deviations from the annual cycle of the regime patterns, it does not negatively affect sub-seasonal forecast skill. Beyond the winter season and the first ten forecast days, sub-seasonal forecasts of ECMWF are still able to achieve weekly frequency correlations of r = 0.5 for some regimes and start dates, including summer ones. ECMWF forecasts beat climatological forecasts in case of long-lasting regime events, and when measured by the fair continuous ranked probability skill score, but not when measured by the Brier skill score. Thus, more efforts have to be done yet in order to achieve minimum skill necessary to develop forecast products based on weather regimes outside winter season.
CitationCortesi, N. [et al.]. Yearly evolution of Euro-Atlantic weather regimes and of their sub-seasonal predictability. "Climate Dynamics", 2021,
URIhttp://hdl.handle.net/2117/340518
DOI10.1007/s00382-021-05679-y
ISSN0930-7575
Publisher versionhttps://link.springer.com/article/10.1007/s00382-021-05679-y
Collections
Share: