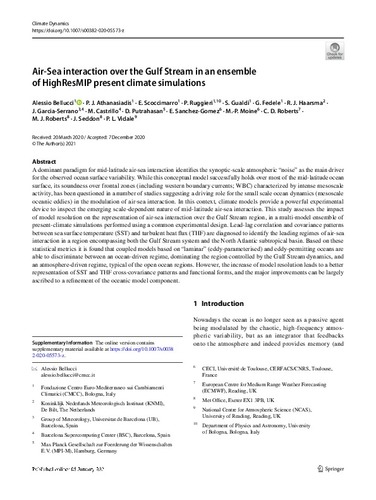 Except where otherwise noted, content on this work is licensed under a Creative Commons license : Attribution 3.0 Spain
ProjectPRIMAVERA - PRocess-based climate sIMulation: AdVances in high resolution modelling and European climate Risk Assessment (EC-H2020-641727)
Abstract
A dominant paradigm for mid-latitude air-sea interaction identifies the synoptic-scale atmospheric “noise” as the main driver for the observed ocean surface variability. While this conceptual model successfully holds over most of the mid-latitude ocean surface, its soundness over frontal zones (including western boundary currents; WBC) characterized by intense mesoscale activity, has been questioned in a number of studies suggesting a driving role for the small scale ocean dynamics (mesoscale oceanic eddies) in the modulation of air-sea interaction. In this context, climate models provide a powerful experimental device to inspect the emerging scale-dependent nature of mid-latitude air-sea interaction. This study assesses the impact of model resolution on the representation of air-sea interaction over the Gulf Stream region, in a multi-model ensemble of present-climate simulations performed using a common experimental design. Lead-lag correlation and covariance patterns between sea surface temperature (SST) and turbulent heat flux (THF) are diagnosed to identify the leading regimes of air-sea interaction in a region encompassing both the Gulf Stream system and the North Atlantic subtropical basin. Based on these statistical metrics it is found that coupled models based on “laminar” (eddy-parameterised) and eddy-permitting oceans are able to discriminate between an ocean-driven regime, dominating the region controlled by the Gulf Stream dynamics, and an atmosphere-driven regime, typical of the open ocean regions. However, the increase of model resolution leads to a better representation of SST and THF cross-covariance patterns and functional forms, and the major improvements can be largely ascribed to a refinement of the oceanic model component.
CitationBellucci, A. [et al.]. Air-Sea interaction over the Gulf Stream in an ensemble of HighResMIP present climate simulations. "Climate Dynamics", 2021,
URIhttp://hdl.handle.net/2117/340396
DOI10.1007/s00382-020-05573-z
ISSN0930-7575
Publisher versionhttps://link.springer.com/article/10.1007/s00382-020-05573-z
Collections
Share: