The energy transfer from granular landslides to water bodies explained by a data-driven, physics-based numerical model 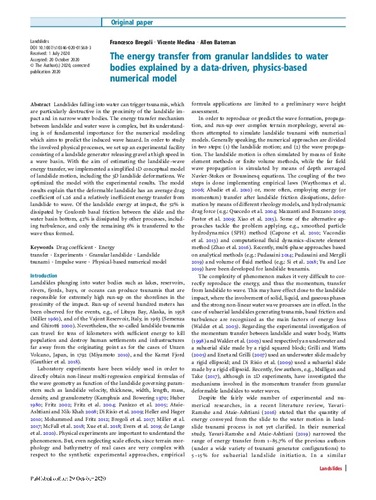 Except where otherwise noted, content on this work is licensed under a Creative Commons license : Attribution-NonCommercial-NoDerivs 3.0 Spain
Abstract
Landslides falling into water can trigger tsunamis, which are particularly destructive in the proximity of the landslide impact and in narrow water bodies. The energy transfer mechanism between landslide and water wave is complex, but its understanding is of fundamental importance for the numerical modeling which aims to predict the induced wave hazard. In order to study the involved physical processes, we set up an experimental facility consisting of a landslide generator releasing gravel at high speed in a wave basin. With the aim of estimating the landslide–wave energy transfer, we implemented a simplified 1D conceptual model of landslide motion, including the 3D landslide deformations. We optimized the model with the experimental results. The model results explain that the deformable landslide has an average drag coefficient of 1.26 and a relatively inefficient energy transfer from landslide to wave. Of the landslide energy at impact, the 52% is dissipated by Coulomb basal friction between the slide and the water basin bottom, 42% is dissipated by other processes, including turbulence, and only the remaining 6% is transferred to the wave thus formed.
CitationBregoli, F.; De Medina, V.; Bateman, A. The energy transfer from granular landslides to water bodies explained by a data-driven, physics-based numerical model. "Landslides", 29 Octubre 2020,
URIhttp://hdl.handle.net/2117/340344
DOI10.1007/s10346-020-01568-3
ISSN1612-5118
Publisher versionhttps://link.springer.com/article/10.1007/s10346-020-01568-3
Collections
Share: