Tensile strength of a vegetated and partially saturated soil 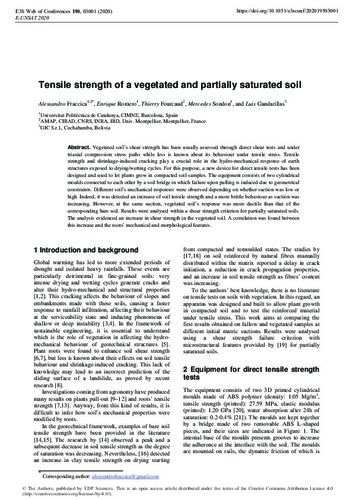 Except where otherwise noted, content on this work is licensed under a Creative Commons license : Attribution 3.0 Spain
ProjectTERRE - Training Engineers and Researchers to Rethink geotechnical Engineering for a low carbon future (EC-H2020-675762)
Abstract
Vegetated soil’s shear strength has been usually assessed through direct shear tests and under triaxial compression stress paths while less is known about its behaviour under tensile stress. Tensile strength and shrinkage-induced cracking play a crucial role in the hydro-mechanical response of earth structures exposed to drying/wetting cycles. For this purpose, a new device for direct tensile tests has been designed and used to let plants grow in compacted soil samples. The equipment consists of two cylindrical moulds connected to each other by a soil bridge in which failure upon pulling is induced due to geometrical constraints. Different soil’s mechanical responses were observed depending on whether suction was low or high. Indeed, it was detected an increase of soil tensile strength and a more brittle behaviour as suction was increasing. However, at the same suction, vegetated soil’s response was more ductile than that of the corresponding bare soil. Results were analysed within a shear strength criterion for partially saturated soils. The analysis evidenced an increase in shear strength in the vegetated soil. A correlation was found between this increase and the roots’ mechanical and morphological features.
CitationFraccica, A. [et al.]. Tensile strength of a vegetated and partially saturated soil. "E3S Web of Conferences", Octubre 2020, vol. 195, p. 03001:1-03001:6.
URIhttp://hdl.handle.net/2117/340324
DOI10.1051/e3sconf/202019503001
ISSN2267-1242
Publisher versionhttps://www.e3s-conferences.org/articles/e3sconf/abs/2020/55/e3sconf_e-unsat2020_03001/e3sconf_e-unsat2020_03001.html
Other identifiershttps://hal.inrae.fr/hal-02973937
Collections
Share: