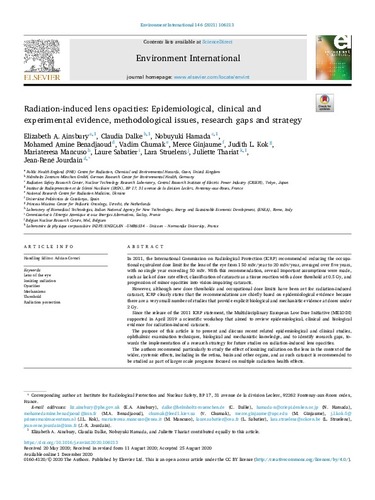 Except where otherwise noted, content on this work is licensed under a Creative Commons license : Attribution-NonCommercial-NoDerivs 3.0 Spain
Abstract
In 2011, the International Commission on Radiological Protection (ICRP) recommended reducing the occupational equivalent dose limit for the lens of the eye from 150 mSv/year to 20 mSv/year, averaged over five years, with no single year exceeding 50 mSv. With this recommendation, several important assumptions were made, such as lack of dose rate effect, classification of cataracts as a tissue reaction with a dose threshold at 0.5 Gy, and progression of minor opacities into vision-impairing cataracts. However, although new dose thresholds and occupational dose limits have been set for radiation-induced cataract, ICRP clearly states that the recommendations are chiefly based on epidemiological evidence because there are a very small number of studies that provide explicit biological and mechanistic evidence at doses under 2 Gy. Since the release of the 2011 ICRP statement, the Multidisciplinary European Low Dose Initiative (MELODI) supported in April 2019 a scientific workshop that aimed to review epidemiological, clinical and biological evidence for radiation-induced cataracts. The purpose of this article is to present and discuss recent related epidemiological and clinical studies, ophthalmic examination techniques, biological and mechanistic knowledge, and to identify research gaps, towards the implementation of a research strategy for future studies on radiation-induced lens opacities. The authors recommend particularly to study the effect of ionizing radiation on the lens in the context of the wider, systemic effects, including in the retina, brain and other organs, and as such cataract is recommended to be studied as part of larger scale programs focused on multiple radiation health effects.
CitationAinsbury, E. [et al.]. Radiation-induced lens opacities: Epidemiological, clinical and experimental evidence, methodological issues, research gaps and strategy. "Environment international", 1 Gener 2021, vol. 146, núm. 106213, p. 106213:1-106213:14.
URIhttp://hdl.handle.net/2117/339770
DOI10.1016/j.envint.2020.106213
ISSN0160-4120
Publisher versionhttps://www.sciencedirect.com/science/article/pii/S0160412020321681
Collections
Share: