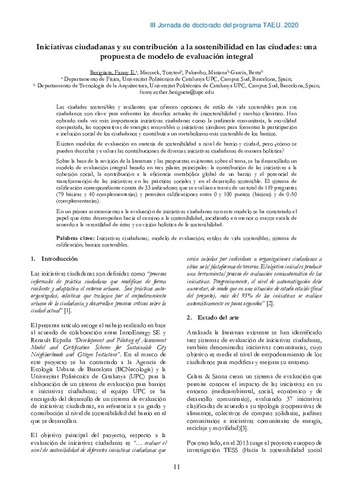 Show full item record
Velazquez Robles, Jani Fernanda
Document typeConference report
PublisherEscola Politècnica Superior d'Edificació de Barcelona
Rights accessOpen Access
Abstract
One of the main architectural goals these days is to produce constructions with less negative impacts ( social and environmental) and urban resilience to the effects of climate change. According to the United Nations, natural phenomenon’s and rapid urbanization are not separate concepts. It is e stimated that nearly 40 percent of the world’s urban expansion may be in slums, exacerbating economic disparities and unsanitary conditions, and a large portion of this people will be at risk from sea level rise, heat waves, storms and floods whose frequen cy and intensity climate change is likely to increase. As a response to this urban sprawl, decision makers and architects have developed and implemented different housing solutions for one of the most affected group: low income users. In México, Tabasco is one of the most affected States for flooding every year with significant negative impact in low income housing infrastructure. In this paper, Pepe del Rivero housing development located in Nacajuca Tabasco was analyzed as a case study The project was built by the Tabasco government in 2016 as a response for the necessity of low income housing of Nacajuca and designed to resist annual floods. The methodology used in this pa per to analyze the architectonical quality was done by 31 surveys to people living in Pepe del Rivero housing d evelopment. Not all the users were interviewed because some of them were not at home and others didn’t want to answer any question naire for perso nal reasons. The results showed that the house design could be improved in the future taking into account aspects such as: Access to public transportation in the zone, daily availability of water and electricity in case of floods, more flexibility in the house layout to expand the ir house s for future family members and the nec es sity of more storage space. This paper showed that there is a big potential doing Post O c cupancy Evaluations to improve the future performance of the low income housing according to the user’s needs.
Location
1: Calle del Maestro 27, Centro, 86220 Nacajuca, Tab., Mèxic
CitationVelazquez Robles, J.F. Low income housing in flood areas Studied cases in Nacajuca, Tabasco, México. A: "Actas de la 3a Jornada de Doctorado del programa de Tecnología de la arquitectura, de la Edificación y del Urbanismo 2020". Barcelona: Escola Politècnica Superior d'Edificació de Barcelona, 2020, p. 17-20.
URIhttp://hdl.handle.net/2117/339454
Collections
Share: