Case study of a heavily damaged building during the 2016 MW 7.8 Ecuador earthquake: directionality effects in seismic actions and damage assessment 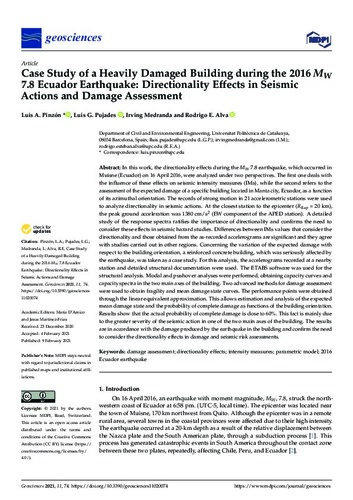 Except where otherwise noted, content on this work is licensed under a Creative Commons license : Attribution 3.0 Spain
ProjectDESARROLLO Y APLICACION DE HERRAMIENTAS AVANZADAS PARA LA EVALUACION, PREVENCION Y GESTION DEL RIESGO SISMICO (MINECO-CGL2015-65913-P)
EC-INTERREGV-INTERREGEFA158
Abstract
In this work, the directionality effects during the MW 7.8 earthquake, which occurred in Muisne (Ecuador) on 16 April 2016, were analyzed under two perspectives. The first one deals with the influence of these effects on seismic intensity measures (IMs), while the second refers to the assessment of the expected damage of a specific building located in Manta city, Ecuador, as a function of its azimuthal orientation. The records of strong motion in 21 accelerometric stations were used to analyze directionality in seismic actions. At the closest station to the epicenter (RRup = 20 km), the peak ground acceleration was 1380 cm/s2 (EW component of the APED station). A detailed study of the response spectra ratifies the importance of directionality and confirms the need to consider these effects in seismic hazard studies. Differences between IMs values that consider the directionality and those obtained from the as-recorded accelerograms are significant and they agree with studies carried out in other regions. Concerning the variation of the expected damage with respect to the building orientation, a reinforced concrete building, which was seriously affected by the earthquake, was taken as a case study. For this analysis, the accelerograms recorded at a nearby station and detailed structural documentation were used. The ETABS software was used for the structural analysis. Modal and pushover analyses were performed, obtaining capacity curves and capacity spectra in the two main axes of the building. Two advanced methods for damage assessment were used to obtain fragility and mean damage state curves. The performance points were obtained through the linear equivalent approximation. This allows estimation and analysis of the expected mean damage state and the probability of complete damage as functions of the building orientation. Results show that the actual probability of complete damage is close to 60%. This fact is mainly due to the greater severity of the seismic action in one of the two main axes of the building. The results are in accordance with the damage produced by the earthquake in the building and confirm the need to consider the directionality effects in damage and seismic risk assessments.
CitationPinzon, L. [et al.]. Case study of a heavily damaged building during the 2016 MW 7.8 Ecuador earthquake: directionality effects in seismic actions and damage assessment. "Geosciences (Switzerland)", Febrer 2021, vol. 11, núm. 2, p. 74:1-74:21.
URIhttp://hdl.handle.net/2117/339448
DOI10.3390/geosciences11020074
ISSN2076-3263
Publisher versionhttps://www.mdpi.com/2076-3263/11/2/74
Collections
Share: