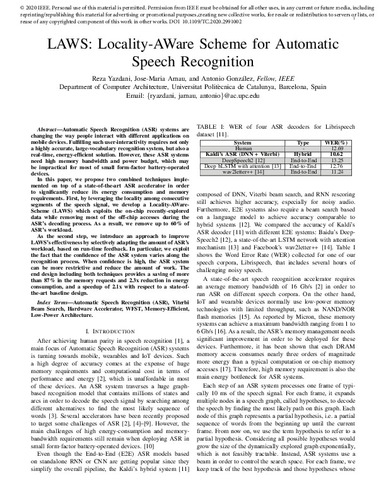 Document typeArticle
PublisherInstitute of Electrical and Electronics Engineers (IEEE)
Rights accessOpen Access
European Commission's projectCoCoUnit - CoCoUnit: An Energy-Efficient Processing Unit for Cognitive Computing (EC-H2020-833057)
Abstract
Automatic Speech Recognition (ASR) systems are changing the way people interact with different applications on mobile devices. Fulfilling such user-interactivity requires not only a highly accurate, large-vocabulary recognition system, but also a real-time, energy-efficient solution. However, these ASR systems need high memory bandwidth and power budget, which may be impractical for most of small form-factor battery-operated devices. In this article, we propose two combined techniques implemented on top of a state-of-the-art ASR accelerator in order to significantly reduce its energy consumption and memory requirements. First, by leveraging the locality among consecutive segments of the speech signal, we develop a Locality-AWare-Scheme (LAWS) which exploits the on-chip recently-explored data while removing most of the off-chip accesses during the ASR's decoding process. As a result, we remove up to 60 percent of ASR's workload. As the second step, we introduce an approach to improve LAWS's effectiveness by selectively adapting the amount of ASR's workload, based on run-time feedback. In particular, we exploit the fact that the confidence of the ASR system varies along the recognition process. When confidence is high, the ASR system can be more restrictive and reduce the amount of work. The end design including both techniques provides a saving of more than 87 percent in the memory requests and 2.3x reduction in energy consumption, and a speedup of 2.1x with respect to a state-of-the-art baseline design.
CitationYazdani, R.; Arnau, J.; González, A. LAWS: Locality-AWare Scheme for automatic speech recognition. "IEEE transactions on computers", 1 Agost 2020, vol. 69, núm. 8, p. 1197-1208.
URIhttp://hdl.handle.net/2117/338030
DOI10.1109/TC.2020.2991002
ISSN0018-9340
Publisher versionhttps://ieeexplore.ieee.org/document/9080113/
Collections
Share: