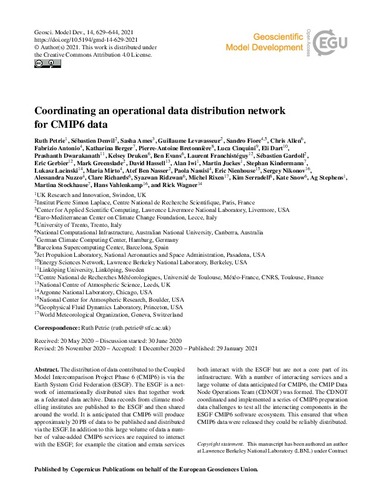 Except where otherwise noted, content on this work is licensed under a Creative Commons license : Attribution 3.0 Spain
ProjectIS-ENES3 - Infrastructure for the European Network for Earth System modelling (EC-H2020-824084)
Abstract
The distribution of data contributed to the Coupled Model Intercomparison Project Phase 6 (CMIP6) is via the Earth System Grid Federation (ESGF). The ESGF is a network of internationally distributed sites that together work as a federated data archive. Data records from climate modelling institutes are published to the ESGF and then shared around the world. It is anticipated that CMIP6 will produce approximately 20 PB of data to be published and distributed via the ESGF. In addition to this large volume of data a number of value-added CMIP6 services are required to interact with the ESGF; for example the citation and errata services both interact with the ESGF but are not a core part of its infrastructure. With a number of interacting services and a large volume of data anticipated for CMIP6, the CMIP Data Node Operations Team (CDNOT) was formed. The CDNOT coordinated and implemented a series of CMIP6 preparation data challenges to test all the interacting components in the ESGF CMIP6 software ecosystem. This ensured that when CMIP6 data were released they could be reliably distributed.
CitationPetrie, R. [et al.]. Coordinating an operational data distribution network for CMIP6 data. "Geoscientific Model Development", 2021, vol. 14, p. 629-644.
URIhttp://hdl.handle.net/2117/337688
DOI10.5194/gmd-14-629-2021
ISSN1991-959X
Publisher versionhttps://gmd.copernicus.org/articles/14/629/2021/gmd-14-629-2021.html
Collections
Share: