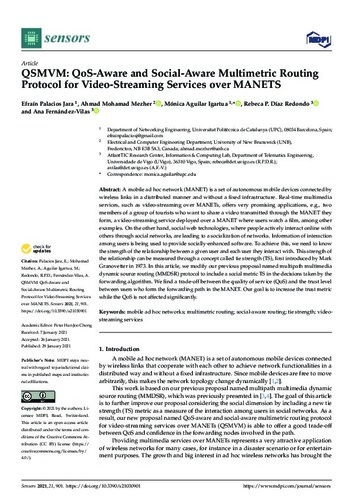 Díaz Redondo, Rebeca P.
Fernández Vilas, Ana
Document typeArticle
PublisherMultidisciplinary Digital Publishing Institute (MDPI)
Rights accessOpen Access
ProjectMONITORIZACION DE INCIDENTES EN COMUNIDADES INTELIGENTES (MINECO-TEC2014-54335-C4-1-R)
Abstract
A mobile ad hoc network (MANET) is a set of autonomous mobile devices connected by wireless links in a distributed manner and without a fixed infrastructure. Real-time multimedia services, such as video-streaming over MANETs, offers very promising applications, e.g., two members of a group of tourists who want to share a video transmitted through the MANET they form, a video-streaming service deployed over a MANET where users watch a film, among other examples. On the other hand, social web technologies, where people actively interact online with others through social networks, are leading to a socialization of networks. Information of interaction among users is being used to provide socially-enhanced software. To achieve this, we need to know the strength of the relationship between a given user and each user they interact with. This strength of the relationship can be measured through a concept called tie strength (TS), first introduced by Mark Granovetter in 1973. In this article, we modify our previous proposal named multipath multimedia dynamic source routing (MMDSR) protocol to include a social metric TS in the decisions taken by the forwarding algorithm. We find a trade-off between the quality of service (QoS) and the trust level between users who form the forwarding path in the MANET. Our goal is to increase the trust metric while the QoS is not affected significantly.
CitationPalacios, E. [et al.]. QSMVM: QoS-aware and social-aware multimetric routing protocol for video-streaming services over MANETS. "Sensors", 29 Gener 2021, vol. 21, núm. 3, p. 901-922.
URIhttp://hdl.handle.net/2117/337137
DOI10.3390/s21030901
ISSN1424-8220
Publisher versionhttps://www.mdpi.com/1424-8220/21/3/901
Collections
Share: