About Sert’s drawing for Harvard planning, a reference for pedagogical innovation? 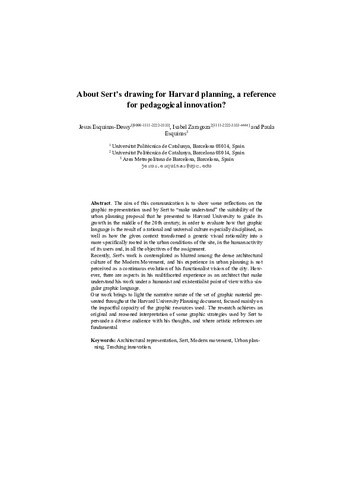 Esquinas, Paula
Document typePart of book or chapter of book
PublisherSpringer
Rights accessOpen Access
Abstract
The aim of this paper is to show some reflections on the graphic re-presentation used by Sert to “make understand” the suitability of the ur-ban planning proposal that he presented to Harvard University to guide its growth in the middle of the 20th century, in order to evaluate how that graphic language is the result of a rational and universal culture especially disciplined, as well as how the given context transformed a generic visual ra-tionality into a more specifically rooted in the urban conditions of the site, in the human activity of its users and, in all the objectives of the assignment. Recently, Sert's work is contemplated as blurred among the dense architec-tural culture of the Modern Movement, and his experience in urban planning is not perceived as a continuous evolution of his functionalist vision of the city. However, there are aspects in his multifaceted experience as an archi-tect that make understand his work under a humanist and existentialist point of view with a singular graphic language. Our work brings to light the narrative nature of the set of graphic material presented throughout the Harvard University Planning document, focused mainly on the impactful capacity of the graphic resources used. The research achieves an original and reasoned interpretation of some graphic strategies used by Sert to persuade a diverse audience with his thoughts, and where ar-tistic references are fundamental.
CitationEsquinas, J.; Zaragoza, I.; Esquinas, P. About Sert's drawing for Harvard planning, a reference for pedagogical innovation? A: "Graphical Heritage : volume 2 : representation, analysis, concept and creation". Berlín: Springer, 2020, p. 571-584.
URIhttp://hdl.handle.net/2117/337095
DOI10.1007/978-3-030-47983-1_51
ISBN978-3-030-47982-4
Publisher versionhttps://link.springer.com/book/10.1007/978-3-030-47983-1
Collections
Share: