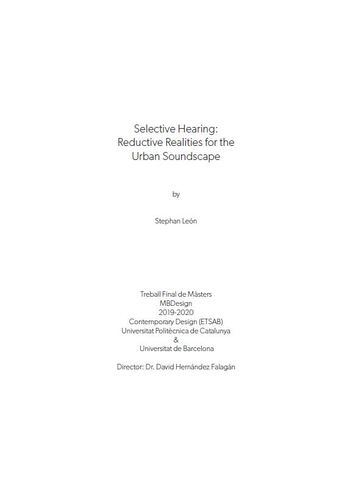 Document typeMaster thesis
Rights accessOpen Access
Abstract
The issue of noise pollution within urban areas is treated as a matter of nuisance as opposed to one of health. Because of this approach, municipal attempts to address noise related issues have done little to mitigate harm done to urban residents . Due to a lack of success in addressing the problem at the city-wide level, there is potential to explore possibilities for change at the individual level. With this shift from a macro to a micro level, augmented reality can serve as a tool to reshape the urban experience and create sonic intimacy in an environment devoid of it. The concept of augmented reality as a tool for addressing noise pollution influenced the problem statement of this project: How can augmented reality reshape the urban soundscape when people decide they need less sound, not more? Information and concepts from case studies, field data, and literature were consulted in order to attempt to answer this question. Findings from these were synthesized with a speculative approach in order to design one possible solution to the issue of noise pollution. This solution takes the form of an artifact from a reality where clean sound is prioritized and the effects of noise pollution are seen as a matter of public health. This artifact consists of a reductive reality system, called Selective Hearing, which is a software-hardware pairing in the form of a smartphone app and a set of earbuds. Selective Hearing utilizes machine learning, soundboards, and sonography to remove unwanted noise from the user’s surroundings, allowing them to hear only the sounds they elect to hear. While the focus of this project is noise pollution, the reductive use of AR can be applied to issues stemming from other sources of sensory pollution and can serve as an antithesis to the current additive trajectory of AR.
SubjectsNoise pollution, Noise, Augmented reality, Mobile apps, Industrial design, Contaminació acústica, Soroll, Realitat augmentada, Aplicacions mòbils, Disseny industrial
DegreeMÀSTER UNIVERSITARI EN ESTUDIS AVANÇATS EN DISSENY-BARCELONA (Pla 2017)
URIhttp://hdl.handle.net/2117/337017
Collections
Share: