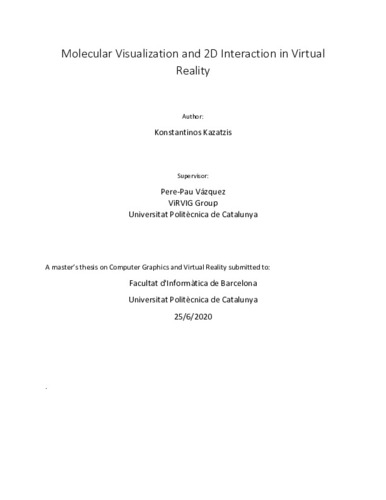 Document typeMaster thesis
Rights accessOpen Access
Abstract
Efficient molecular visualization in a virtual reality environment, requires fast and high-quality rendering of geometrical objects, as well as intuitive interaction and information visualization. Furthermore, it should also take into consideration, the challenges posed by the limitations of virtual reality, which are caused by world space occlusion, and lack of traditional interaction and selection tools. This work aims to contribute in these areas, by providing ray-casting based rendering of impostor geometry objects inside Unity, a 2D navigation and selection technique without the need to use controller-based ray casting, and an occlusion-free world space interaction panel. In this work, we will render high-quality sphere and cylinder impostor objects through ray casting, to be used as the basis for the space-filling and ball-and-stick visualization of molecular models. These impostor objects are built inside the Unity game engine, compatible with Unity's pipeline, lighting and post-processing effects. We also implement a selection technique that allows the user to select and jump to neighboring objects without the need to ray cast into them, that facilitates selection in cluttered regions. With this technique we will visualize atom distances, bond angles, and torsion angles. Finally, we implement a world space interaction panel, that disregards occlusion to ease interaction. All of the above are concluded in a Unity powered application for molecular visualization and interaction in virtual reality.
SubjectsVirtual reality, Realitat virtual, Unity
DegreeMÀSTER UNIVERSITARI EN INNOVACIÓ I RECERCA EN INFORMÀTICA (Pla 2012)
URIhttp://hdl.handle.net/2117/336962
Collections
Share: