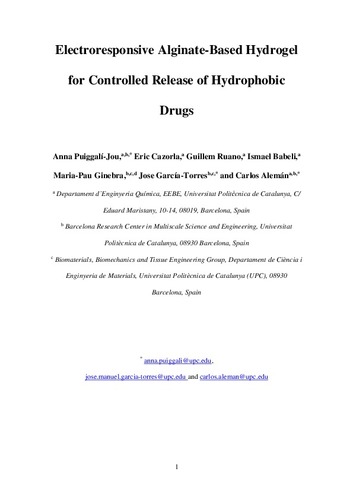 Except where otherwise noted, content on this work is licensed under a Creative Commons license : Attribution-NonCommercial-NoDerivs 3.0 Spain
Abstract
Stimuli-responsive biomaterials have attracted significant attention for the construction of on-demand drug release systems. The possibility of using external stimulation to trigger drug release is particularly enticing for hydrophobic compounds, which are not easily released by simple diffusion. In this work, an electrochemically active hydrogel, which has been prepared by gelling a mixture of poly(3,4-ethylenedioxythiophene):polystyrene sulfonate (PEDOT:PSS) and alginate (Alg), has been loaded with curcumin (CUR), a hydrophobic drug with a wide spectrum of clinical applications. The PEDOT/Alg hydrogel is electrochemically active and organizes as segregated PEDOT- and Alg-rich domains, explaining its behavior as an electroresponsive drug delivery system. When loaded with CUR, the hydrogel demonstrates a controlled drug release upon application of a negative electrical voltage. Comparison with the release profiles obtained applying a positive voltage and in the absence of electrical stimuli indicates that the release mechanism dominating this system is complex because of not only the intermolecular interactions between the drug and the polymeric network but also the loading of a hydrophobic drug in a water-containing delivery system.
CitationPuiggali, A. [et al.]. Electroresponsive alginate-based hydrogels for controlled release of hydrophobic drugs. "ACS biomaterials science & engineering", 9 Novembre 2020, vol. 6, núm. 11, p. 6228-6240.
URIhttp://hdl.handle.net/2117/336943
DOI10.1021/acsbiomaterials.0c01400
ISSN2373-9878
Publisher versionhttps://pubs.acs.org/doi/10.1021/acsbiomaterials.0c01400
Collections
Share: