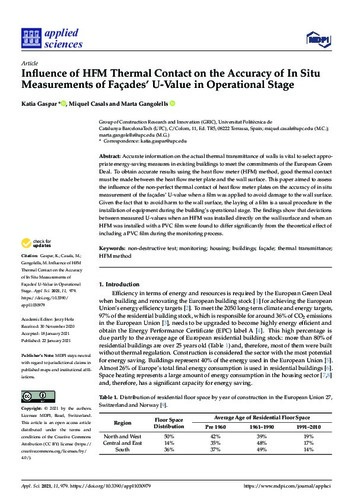 Document typeArticle
PublisherMultidisciplinary Digital Publishing Institute
Rights accessOpen Access
Abstract
Accurate information on the actual thermal transmittance of walls is vital to select appropriate energy-saving measures in existing buildings to meet the commitments of the European Green Deal. To obtain accurate results using the heat flow meter (HFM) method, good thermal contact must be made between the heat flow meter plate and the wall surface. This paper aimed to assess the influence of the non-perfect thermal contact of heat flow meter plates on the accuracy of in situ measurement of the façades’ U-value when a film was applied to avoid damage to the wall surface. Given the fact that to avoid harm to the wall surface, the laying of a film is a usual procedure in the installation of equipment during the building’s operational stage. The findings show that deviations between measured U-values when an HFM was installed directly on the wall surface and when an HFM was installed with a PVC film were found to differ significantly from the theoretical effect of including a PVC film during the monitoring process.
CitationGaspar, K.; Casals, M.; Gangolells, M. Influence of HFM thermal contact on the accuracy of in situ measurements of façades' U-value in operational stage. "Applied sciences", 22 Gener 2021, vol. 11, núm. 3, p. 979/1-979/14.
URIhttp://hdl.handle.net/2117/336933
DOI10.3390/app11030979
ISSN2076-3417
Publisher versionhttps://www.mdpi.com/2076-3417/11/3/979
Collections
Share: