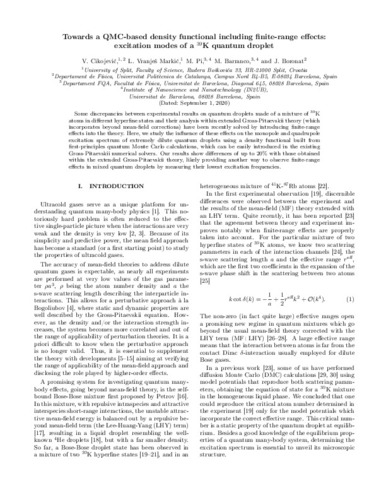 Document typeArticle
PublisherAmerican Physical Society
Rights accessOpen Access
Abstract
Some discrepancies between experimental results on quantum droplets made of a mixture of 39K atoms in different hyperfine states and their analysis within extended Gross-Pitaevskii theory (which incorporates beyond mean-field corrections) have been recently solved by introducing finite-range effects into the theory. Here we study the influence of these effects on the monopole and quadrupole excitation spectrum of extremely dilute quantum droplets using a density functional built from first-principles quantum Monte Carlo calculations, which can be easily introduced in the existing Gross-Pitaevskii numerical solvers. Our results show differences of up to 20% with those obtained within the extended Gross-Pitaevskii theory, likely providing another way to observe finite-range effects in mixed quantum droplets by measuring their lowest excitation frequencies.
CitationCikojevic, V. [et al.]. Towards a quantum Monte Carlo-based density functional including finite-range effects: excitation modes of a K 39 quantum droplet. "Physical Review A", 25 Setembre 2020, vol. 102, núm. 33335, p. 033335:1-033335:8.
URIhttp://hdl.handle.net/2117/336779
DOI10.1103/PhysRevA.102.033335
ISSN2469-9934
Publisher versionhttps://journals.aps.org/pra/abstract/10.1103/PhysRevA.102.033335
Collections
Share: