Application of configurational mechanics to crack propagation in quasi-brittle materials 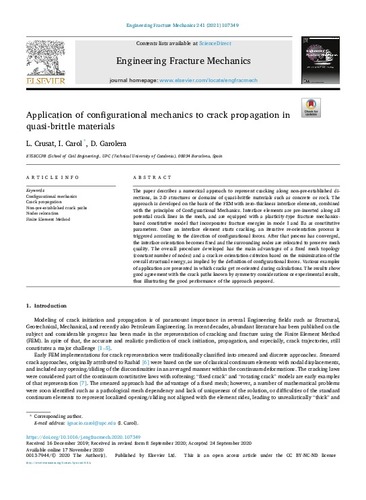 Except where otherwise noted, content on this work is licensed under a Creative Commons license : Attribution-NonCommercial-NoDerivs 4.0 International
Abstract
The paper describes a numerical approach to represent cracking along non-pre-established directions, in 2-D structures or domains of quasi-brittle materials such as concrete or rock. The approach is developed on the basis of the FEM with zero-thickness interface elements, combined with the principles of Configurational Mechanics. Interface elements are pre-inserted along all potential crack lines in the mesh, and are equipped with a plasticity-type fracture mechanics-based constitutive model that incorporates fracture energies in mode I and IIa as constitutive parameters. Once an interface element starts cracking, an iterative re-orientation process is triggered according to the direction of configurational forces. After that process has converged, the interface orientation becomes fixed and the surrounding nodes are relocated to preserve mesh quality. The overall procedure developed has the main advantages of a fixed mesh topology (constant number of nodes) and a crack re-orientation criterion based on the minimization of the overall structural energy, as implied by the definition of configurational forces. Various examples of application are presented in which cracks get re-oriented during calculations. The results show good agreement with the crack paths known by symmetry considerations or experimental results, thus illustrating the good performance of the approach proposed.
CitationCrusat, L.; Carol, I.; Garolera, D. Application of configurational mechanics to crack propagation in quasi-brittle materials. "Engineering fracture mechanics", 2021, vol. 241, p. 107349:1-107349:26.
URIhttp://hdl.handle.net/2117/335965
DOI10.1016/j.engfracmech.2020.107349
ISSN0013-7944
Publisher versionhttps://www.sciencedirect.com/science/article/pii/S0013794420309309
Collections
Share: