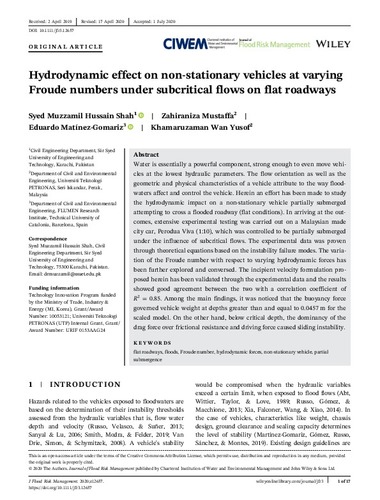 Except where otherwise noted, content on this work is licensed under a Creative Commons license : Attribution 3.0 Spain
Abstract
Water is essentially a powerful component, strong enough to even move vehicles at the lowest hydraulic parameters. The flow orientation as well as the geometric and physical characteristics of a vehicle attribute to the way floodwaters affect and control the vehicle. Herein an effort has been made to study the hydrodynamic impact on a non-stationary vehicle partially submerged attempting to cross a flooded roadway (flat conditions). In arriving at the outcomes, extensive experimental testing was carried out on a Malaysian made city car, Perodua Viva (1:10), which was controlled to be partially submerged under the influence of subcritical flows. The experimental data was proven through theoretical equations based on the instability failure modes. The variation of the Froude number with respect to varying hydrodynamic forces has been further explored and conversed. The incipient velocity formulation proposed herein has been validated through the experimental data and the results showed good agreement between the two with a correlation coefficient of R2 = 0.85. Among the main findings, it was noticed that the buoyancy force governed vehicle weight at depths greater than and equal to 0.0457¿m for the scaled model. On the other hand, below critical depth, the dominancy of the drag force over frictional resistance and driving force caused sliding instability.
CitationShah, S. [et al.]. Hydrodynamic effect on non-stationary vehicles at varying Froude numbers under subcritical flows on flat roadways. "Journal of flood risk management", Desembre 2020, vol. 13, núm. 4, p. e12657:1-e12657:17.
URIhttp://hdl.handle.net/2117/335960
DOI10.1111/jfr3.12657
ISSN1753-318X
Publisher versionhttps://onlinelibrary.wiley.com/doi/full/10.1111/jfr3.12657
Collections
Share: