Labour market trajectories and early retirement due to permanent disability: a study based on 14 972 new cases in Spain 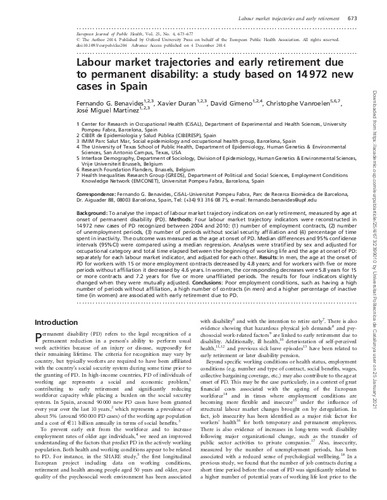 Tipus de documentArticle
Condicions d'accésAccés obert
Abstract
Background: To analyse the impact of labour market trajectory indicators on early retirement, measured by age at onset of permanent disability (PD). Methods : Four labour market trajectory indicators were reconstructed in 14 972 new cases of PD recognized between 2004 and 2010: (1) number of employment contracts, (2) number of unemployment periods, (3) number of periods without social security affiliation and (4) percentage of time spent in inactivity. The outcome was measured as the age at onset of PD. Median differences and 95% confidence intervals (95%CI) were compared using a median regression. Analyses were stratified by sex and adjusted for occupational category and total time elapsed between the beginning of working life and the age at onset of PD: separately for each labour market indicator, and adjusted for each other. Results : In men, the age at the onset of PD for workers with 15 or more employment contracts decreased by 4.8 years; and for workers with five or more periods without affiliation it decreased by 4.6 years. In women, the corresponding decreases were 5.8 years for 15 or more contracts and 7.2 years for five or more unaffiliated periods. The results for four indicators slightly changed when they were mutually adjusted. Conclusions : Poor employment conditions, such as having a high number of periods without affiliation, a high number of contracts (in men) and a higher percentage of inactive time (in women) are associated with early retirement due to PD.
CitacióGarcía Benavides, F. [et al.]. Labour market trajectories and early retirement due to permanent disability: a study based on 14 972 new cases in Spain. "European journal of public health", Agost 2015, vol. 25, núm. 4, p. 673-677.
URIhttp://hdl.handle.net/2117/335942
DOI10.1093/eurpub/cku204
ISSN1101-1262
Versió de l'editorhttps://academic.oup.com/eurpub/article/25/4/673/2399010
Col·leccions
Comparteix: