Fractal behaviour of distances between consecutive aftershocks: the examples of Landers, Northridge and Hector Mine Southern California mainshocks 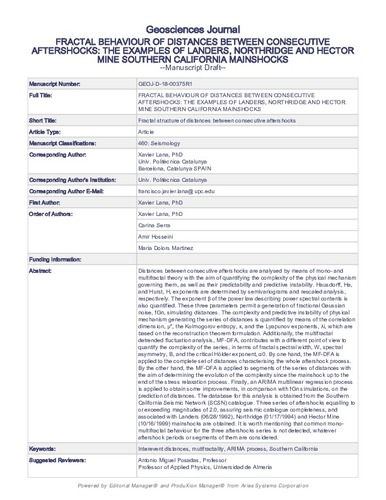 Except where otherwise noted, content on this work is licensed under a Creative Commons license : Attribution-NonCommercial-NoDerivs 3.0 Spain
Abstract
Distances between consecutive aftershocks are analysed by means of mono- and multifractal theory with the aim of quantifying the complexity of the physical mechanism governing them, as well as their predictability and predictive instability. Hausdorff, Ha, and Hurst, H, exponents are determined by semivariograms and rescaled analysis, respectively. The exponent ß of the power law describing power spectral contents is also quantified. These three parameters permit a generation of fractional Gaussian noise, fGn, simulating distances. The complexity and predictive instability of physical mechanism generating the series of distances is quantified by means of the correlation dimension, µ*, the Kolmogorov entropy, ¿, and the Lyapunov exponents, ¿i, which are based on the reconstruction theorem formulation. Additionally, the multifractal detrended fluctuation analysis, MF-DFA, contributes with a different point of view to quantify the complexity of the series, in terms of fractal spectral width, W, spectral asymmetry, B, and the critical Hölder exponent, a0. By one hand, the MF-DFA is applied to the complete set of distances characterising the whole aftershock process. By the other hand, the MF-DFA is applied to segments of the series of distances with the aim of determining the evolution of the complexity since the mainshock up to the end of the stress relaxation process. Finally, an ARIMA multilinear regression process is applied to obtain some improvements, in comparison with fGn simulations, on the prediction of distances. The database for this analysis is obtained from the Southern California Seismic Network (SCSN) catalogue. Three series of aftershocks equalling to or exceeding magnitudes of 2.0, assuring seismic catalogue completeness, and associated with Landers (06/28/1992), Northridge (01/17/1994) and Hector Mine (10/16/1999) mainshocks are obtained. It is worth mentioning that common mono-multifractal behaviour for the three aftershocks series is not detected, whatever aftershock periods or segments of them are considered.
CitationLana, F.J.; Martinez, M.D.; Serra, C. Fractal behaviour of distances between consecutive aftershocks: the examples of Landers, Northridge and Hector Mine Southern California mainshocks. "Geosciences journal", 13 Agost 2020, vol. 24, núm. 2, p. 159-175.
URIhttp://hdl.handle.net/2117/335939
DOI10.1007/s12303-019-0016-9
ISSN1226-4806
Publisher versionhttps://link.springer.com/article/10.1007%2Fs12303-019-0016-9
Collections
Share: