From the boom to the crisis: changes in employment conditions of immigrants in Spain and their effects on mental health 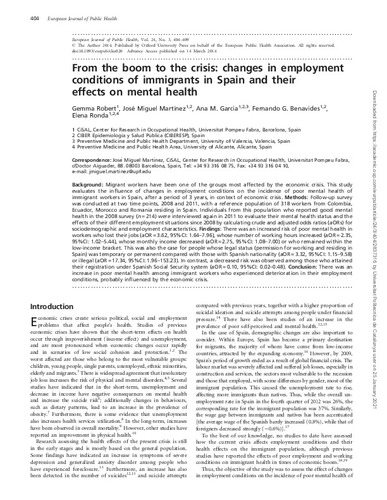 García Benavides, Fernando
Ronda Pérez, Elena
Document typeArticle
Rights accessOpen Access
Abstract
Background: Migrant workers have been one of the groups most affected by the economic crisis. This study evaluates the influence of changes in employment conditions on the incidence of poor mental health of immigrant workers in Spain, after a period of 3 years, in context of economic crisis. Methods: Follow-up survey was conducted at two time points, 2008 and 2011, with a reference population of 318 workers from Colombia, Ecuador, Morocco and Romania residing in Spain. Individuals from this population who reported good mental health in the 2008 survey (n = 214) were interviewed again in 2011 to evaluate their mental health status and the effects of their different employment situations since 2008 by calculating crude and adjusted odds ratios (aORs) for sociodemographic and employment characteristics. Findings: There was an increased risk of poor mental health in workers who lost their jobs (aOR = 3.62, 95%CI: 1.64–7.96), whose number of working hours increased (aOR = 2.35, 95%CI: 1.02–5.44), whose monthly income decreased (aOR = 2.75, 95%CI: 1.08–7.00) or who remained within the low-income bracket. This was also the case for people whose legal status (permission for working and residing in Spain) was temporary or permanent compared with those with Spanish nationality (aOR = 3.32, 95%CI: 1.15–9.58) or illegal (aOR = 17.34, 95%CI: 1.96–153.23). In contrast, a decreased risk was observed among those who attained their registration under Spanish Social Security system (aOR = 0.10, 95%CI: 0.02–0.48). Conclusion: There was an increase in poor mental health among immigrant workers who experienced deterioration in their employment conditions, probably influenced by the economic crisis.
CitationRobert, G. [et al.]. From the boom to the crisis: changes in employment conditions of immigrants in Spain and their effects on mental health. "European journal of public health", 1 Juny 2014, vol. 24, núm. 3, p. 404-409.
URIhttp://hdl.handle.net/2117/335906
DOI10.1093/eurpub/cku020
ISSN1101-1262
Publisher versionhttps://academic.oup.com/eurpub/article/24/3/404/2837316
Collections
Share: