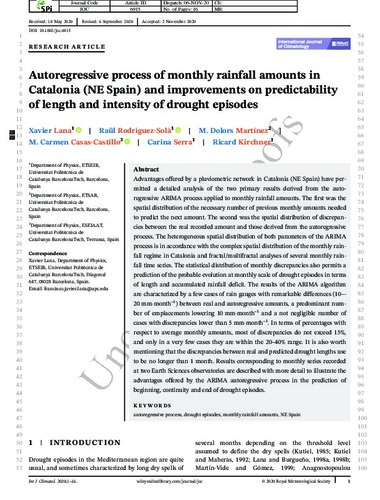 Except where otherwise noted, content on this work is licensed under a Creative Commons license : Attribution-NonCommercial-NoDerivs 3.0 Spain
Abstract
Advantages offered by a pluviometric network in Catalonia (NE Spain) have permitted a detailed analysis of the two primary results derived from the autoregressive ARIMA process applied to monthly rainfall amounts. The first was the spatial distribution of the necessary number of previous monthly amounts needed to predict the next amount. The second was the spatial distribution of discrepancies between the real recorded amount and those derived from the autoregressive process. The heterogeneous spatial distribution of both parameters of the ARIMA process is in accordance with the complex spatial distribution of the monthly rainfall regime in Catalonia and fractal/multifractal analyses of several monthly rainfall time series. The statistical distribution of monthly discrepancies also permits a prediction of the probable evolution at monthly scale of drought episodes in terms of length and accumulated rainfall deficit. The results of the ARIMA algorithm are characterised by a few cases of raingauges with remarkable differences (10-20¿mm/month) between real and autoregressive amounts, a predominant number of emplacements lowering 10¿mm/month and a not negligible number of cases with discrepancies lower than 5¿mm/month. In terms of percentages with respect to average monthly amounts, most of discrepancies do not exceed 15%, and only in a very few cases they are within the 20-40% range. It is also worth mentioning that the discrepancies between real and predicted drought lengths use to be no longer than one month. Results corresponding to monthly series recorded at two Earth Sciences observatories are described with more detail to illustrate the advantages offered by the ARIMA autoregressive process in the prediction of beginning, continuity and end of drought episodes.
CitationLana, F.J. [et al.]. Autoregressive process of monthly rainfall amounts in Catalonia (NE Spain) and improvements on predictability of length and intensity of drought episodes. "International journal of climatology", 2021, vol. 41, núm. S1, p. E3178-E3194.
URIhttp://hdl.handle.net/2117/335905
DOI10.1002/joc.6915
ISSN0899-8418
Publisher versionhttps://rmets.onlinelibrary.wiley.com/doi/abs/10.1002/joc.6915
Collections
Share: