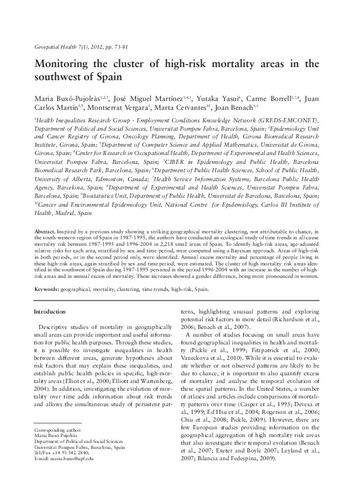 Except where otherwise noted, content on this work is licensed under a Creative Commons license : Attribution-NonCommercial-NoDerivs 4.0 International
Abstract
Inspired by a previous study showing a striking geographical mortality clustering, not attributable to chance, in the south-western region of Spain in 1987-1995, the authors have conducted an ecological study of time trends in all-cause mortality risk between 1987-1995 and 1996-2004 in 2,218 small areas of Spain. To identify high-risk areas, age-adjusted relative risks for each area, stratified by sex and time period, were computed using a Bayesian approach. Areas of high-risk in both periods, or in the second period only, were identified. Annual excess mortality and percentage of people living in these high-risk areas, again stratified by sex and time period, were estimated. The cluster of high mortality risk areas identified in the southwest of Spain during 1987-1995 persisted in the period 1996-2004 with an increase in the number of highrisk areas and in annual excess of mortality. These increases showed a gender difference, being more pronounced in women.
CitationBuxó-Pujoràs, M. [et al.]. Monitoring the cluster of high-risk mortality areas in the southwest of Spain. "Geospatial Health", 1 Novembre 2012, vol. 7, núm. 1, p. 73-81.
URIhttp://hdl.handle.net/2117/335888
DOI10.4081/gh.2012.106
ISSN1827-1987
Publisher versionhttps://geospatialhealth.net/index.php/gh/article/view/106
Collections
Share: