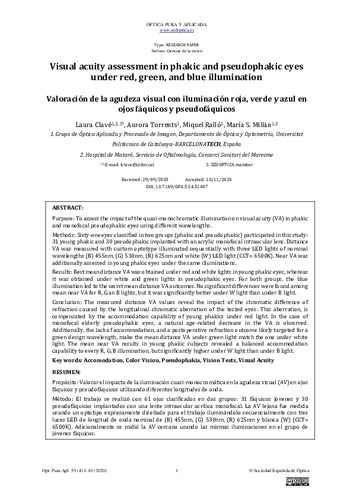 Except where otherwise noted, content on this work is licensed under a Creative Commons license : Attribution-NonCommercial-NoDerivs 3.0 Spain
Abstract
Purpose: To assess the impact of the quasi-monochromatic illumination on visual acuity (VA) in phakic and monofocal pseudophakic eyes using different wavelengths. Methods: Sixty-one eyes classified in two groups (phakic and pseudophakic) participated in this study: 31 young phakic and 30 pseudophakic implanted with an acrylic monofocal intraocular lens. Distance VA was measured with custom optotype illuminated sequentially with three LED lights of nominal wavelengths (B) 455nm, (G) 530nm, (R) 625nm and white (W) LED light (CCT= 6500K). Near VA was additionally assessed in young phakic eyes under the same illuminations. Results: Best mean distance VA was obtained under red and white lights in young phakic eyes, whereas it was obtained under white and green lights in pseudophakic eyes. For both groups, the blue illumination led to the worst mean distance VA outcomes. No significant differences were found among mean near VA for R, G an B lights, but it was significantly better under W light than under B light. Conclusion: The measured distance VA values reveal the impact of the chromatic difference of refraction caused by the longitudinal chromatic aberration of the tested eyes. This aberration, is compensated by the accommodation capability of young phakics under red light. In the case of monofocal elderly pseudophakic eyes, a natural age-related decrease in the VA is observed. Additionally, the lack of accommodation, and a postoperative refraction outcome likely targeted for a green design wavelength, make the mean distance VA under green light match the one under white light. The mean near VA results in young phakic subjects revealed a balanced accommodation capability to every R, G, B illumination, but significantly higher under W light than under B light.
CitationClavé, L. [et al.]. Visual acuity assessment in phakic and pseudophakic eyes under red, green, and blue illumination. "Óptica pura y aplicada", 31 Desembre 2020, vol. 53, núm. 4, p. 1-10.
URIhttp://hdl.handle.net/2117/335851
DOI10.7149/OPA.53.4.51047
ISSN2171-8814
Publisher versionhttps://www.sedoptica.es/Menu_Volumenes/Pdfs/OPA.53.4.51047.pdf
Collections
Share: