The spectrum of gravitational waves, their overproduction in quintessential inflation and its influence in the reheating temperature 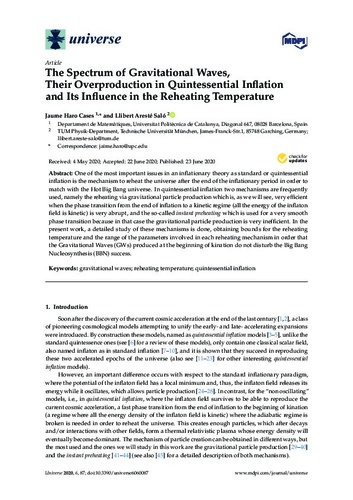 Aresté Saló, Llibert
Document typeArticle
Rights accessOpen Access
Abstract
One of the most important issues in an inflationary theory as standard or quintessential inflation is the mechanism to reheat the universe after the end of the inflationary period in order to match with the Hot Big Bang universe. In quintessential inflation two mechanisms are frequently used, namely the reheating via gravitational particle production which is, as we will see, very efficient when the phase transition from the end of inflation to a kinetic regime (all the energy of the inflaton field is kinetic) is very abrupt, and the so-called instant preheating which is used for a very smooth phase transition because in that case the gravitational particle production is very inefficient. In the present work, a detailed study of these mechanisms is done, obtaining bounds for the reheating temperature and the range of the parameters involved in each reheating mechanism in order that the Gravitational Waves (GWs) produced at the beginning of kination do not disturb the Big Bang Nucleosynthesis (BBN) success
CitationHaro, J.; Aresté, L. The spectrum of gravitational waves, their overproduction in quintessential inflation and its influence in the reheating temperature. "Universe", 1 Juny 2020, vol. 6, núm. 6, p. 87-1-87-35.
URIhttp://hdl.handle.net/2117/335822
DOI10.3390/universe6060087
ISSN2218-1997
Publisher versionhttps://www.mdpi.com/2218-1997/6/6/87
Collections
Share: