Design of a field mill sensor to be used in an UAV platform for charge control research. Field meal sensor 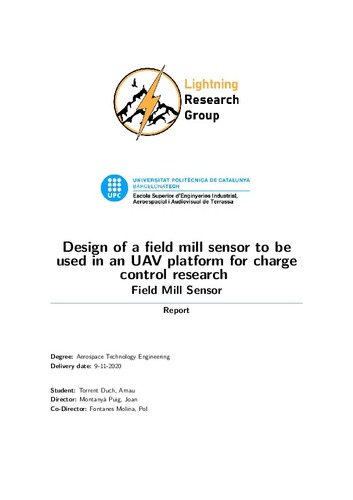 Except where otherwise noted, content on this work is licensed under a Creative Commons license : Attribution 3.0 Spain
Abstract
Nowadays in aviation lightning safety efforts are focused on limiting the damage done to an aircraft when struck, and very little research on the reduction of lightning strikes has been carried out. Studies show that modifying the net electrical charge of an aircraft modifies its electrical interaction with the atmosphere and thus affecting the possibility of an aircraft triggering lightning.The Lightning Research Groupat the Universitat Politècnica de Catalunya is currently conducting tests on an aircraft prototype with which the control of the net electrical charge in an aircraft via corona discharge is attempted. The tool to measure the amount of acquired charge is the electric field mill, and this thesis aims to design and build an electric field mill for this specific reason
SubjectsLightning, Atmospheric electricity, Drone aircraft, Electric fields, Llamps, Electricitat atmosfèrica, Avions no tripulats, Camps elèctrics
DegreeGRAU EN ENGINYERIA EN VEHICLES AEROESPACIALS (Pla 2010)
URIhttp://hdl.handle.net/2117/335757
Collections
Share: