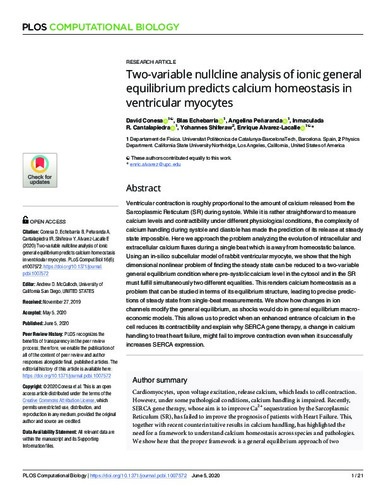 Document typeContribution to periodical
Rights accessOpen Access
Abstract
Ventricular contraction is roughly proportional to the amount of calcium released from the Sarcoplasmic Reticulum (SR) during systole. While it is rather straightforward to measure calcium levels and contractibility under different physiological conditions, the complexity of calcium handling during systole and diastole has made the prediction of its release at steady state impossible. Here we approach the problem analyzing the evolution of intracellular and extracellular calcium fluxes during a single beat which is away from homeostatic balance. Using an in-silico subcellular model of rabbit ventricular myocyte, we show that the high dimensional nonlinear problem of finding the steady state can be reduced to a two-variable general equilibrium condition where pre-systolic calcium level in the cytosol and in the SR must fulfill simultaneously two different equalities. This renders calcium homeostasis as a problem that can be studied in terms of its equilibrium structure, leading to precise predictions of steady state from single-beat measurements. We show how changes in ion channels modify the general equilibrium, as shocks would do in general equilibrium macroeconomic models. This allows us to predict when an enhanced entrance of calcium in the cell reduces its contractibility and explain why SERCA gene therapy, a change in calcium handling to treat heart failure, might fail to improve contraction even when it successfully increases SERCA expression.
CitationConesa, D. [et al.]. Two-variable nullcline analysis of ionic general equilibrium predicts calcium homeostasis in ventricular myocytes. "PLoS Computational Biology". 1 Juny 2020, vol. 16, núm. 6, p. 1-21. ISSN 1553-7358. DOI 10.1371/journal.pcbi.1007572.
URIhttp://hdl.handle.net/2117/335748
DOI10.1371/journal.pcbi.1007572
ISSN1553-7358
Publisher versionhttps://journals.plos.org/ploscompbiol/article?id=10.1371/journal.pcbi.1007572
Collections
Share: