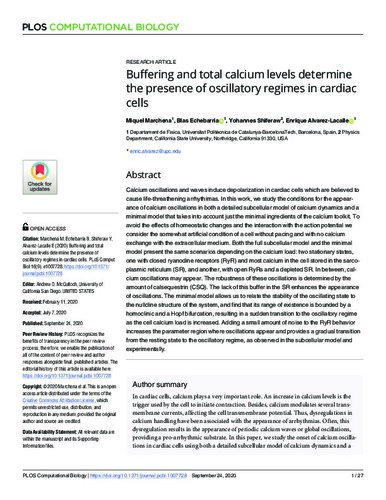 Document typeArticle
Rights accessOpen Access
Abstract
Calcium oscillations and waves induce depolarization in cardiac cells which are believed to cause life-threathening arrhythimas. In this work, we study the conditions for the appearance of calcium oscillations in both a detailed subcellular model of calcium dynamics and a minimal model that takes into account just the minimal ingredients of the calcium toolkit. To avoid the effects of homeostatic changes and the interaction with the action potential we consider the somewhat artificial condition of a cell without pacing and with no calcium exchange with the extracellular medium. Both the full subcellular model and the minimal model present the same scenarios depending on the calcium load: two stationary states, one with closed ryanodine receptors (RyR) and most calcium in the cell stored in the sarcoplasmic reticulum (SR), and another, with open RyRs and a depleted SR. In between, calcium oscillations may appear. The robustness of these oscillations is determined by the amount of calsequestrin (CSQ). The lack of this buffer in the SR enhances the appearance of oscillations. The minimal model allows us to relate the stability of the oscillating state to the nullcline structure of the system, and find that its range of existence is bounded by a homoclinic and a Hopf bifurcation, resulting in a sudden transition to the oscillatory regime as the cell calcium load is increased. Adding a small amount of noise to the RyR behavior increases the parameter region where oscillations appear and provides a gradual transition from the resting state to the oscillatory regime, as observed in the subcellular model and experimentally.
CitationMarchena, M. [et al.]. Buffering and total calcium levels determine the presence of oscillatory regimes in cardiac cells. "PLoS Computational Biology", 24 Setembre 2020, vol. 16, núm. 9, p. 1-27.
URIhttp://hdl.handle.net/2117/335578
DOI10.1371/journal.pcbi.1007728
ISSN1553-7358
Publisher versionhttps://journals.plos.org/ploscompbiol/article?id=10.1371/journal.pcbi.1007728
Collections
Share: