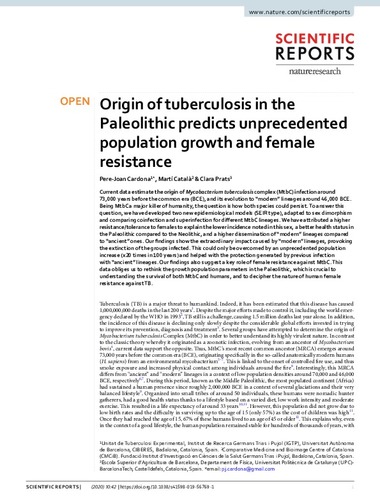 Document typeArticle
PublisherNature
Rights accessOpen Access
Abstract
Current data estimate the origin of Mycobacterium tuberculosis complex (MtbC) infection around 73,000 years before the common era (BCE), and its evolution to “modern” lineages around 46,000 BCE. Being MtbC a major killer of humanity, the question is how both species could persist. To answer this question, we have developed two new epidemiological models (SEIR type), adapted to sex dimorphism and comparing coinfection and superinfection for diferent MtbC lineages. We have attributed a higher resistance/tolerance to females to explain the lower incidence noted in this sex, a better health status in the Paleolithic compared to the Neolithic, and a higher dissemination of “modern” lineages compared to “ancient” ones. Our fndings show the extraordinary impact caused by “modern” lineages, provoking the extinction of the groups infected. This could only be overcomed by an unprecedented population increase (x20 times in 100 years) and helped with the protection generated by previous infection with “ancient” lineages. Our fndings also suggest a key role of female resistance against MtbC. This data obliges us to rethink the growth population parameters in the Paleolithic, which is crucial to understanding the survival of both MtbC and humans, and to decipher the nature of human female resistance against TB
CitationCardona, P.J.; Català, M.; Prats, C. Origin of tuberculosis in the Paleolithic predicts unprecedented population growth and female resistance. "Scientific reports", 8 Gener 2020, vol. 10, p. 42-1-42-20.
URIhttp://hdl.handle.net/2117/335524
DOI10.1038/s41598-019-56769-1
ISSN2045-2322
Publisher versionhttps://www.nature.com/articles/s41598-019-56769-1
Collections
Share: