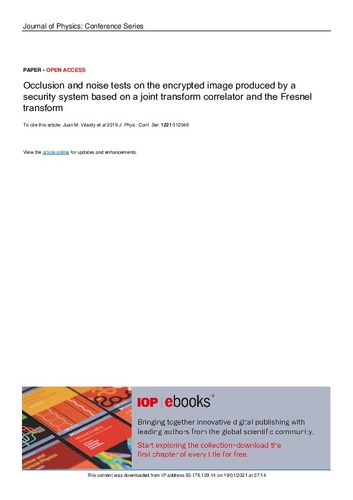 Except where otherwise noted, content on this work is licensed under a Creative Commons license : Attribution 3.0 Spain
ProjectSISTEMAS DE PROFUNDIDAD DE FOCO EXTENDIDA Y LENTES INTRAOCULARES MULTIFOCALES PARA LA SALUD VISUAL (MINECO-DPI2013-43220-R)
Abstract
In this work, the occlusion and noise test on the encrypted image produced by a joint transform correlator-based encryption system in the Fresnel domain (FrD) are computed and presented, in order to check the performance of this security system with respect to the image quality resulting in the decryption process for the retrieved image. The encryption system based on a joint transform correlator (JTC) in the FrD was proposed by us, with the purpose of using a lensless optical setup. We test the performance of this security system when the encrypted image is affected by common sources of degradation such as noise (additive and multiplicative) or partial occlusion. Finally, we evaluate the performance and robustness of the security system in the FrD by using the metric of the root mean square error (RMSE) between the image to encrypt and the decrypted image when the encrypted image is degraded by noise or modified by occlusion.
CitationVilardy, J.M.; Millan, M.; Pérez-Cabré, E. Occlusion and noise tests on the encrypted image produced by a security system based on a joint transform correlator and the Fresnel transform. "Journal of physics: conference series", Juny 2019, vol. 1221, p. 1-6.
URIhttp://hdl.handle.net/2117/335494
DOI10.1088/1742-6596/1221/1/012046
ISSN1742-6588
Publisher versionhttps://iopscience.iop.org/article/10.1088/1742-6596/1221/1/012046/pdf
Collections
Share: