A review of gas-surface interaction models for orbital aerodynamics applications 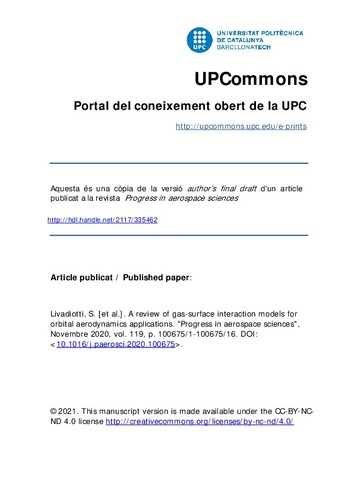 Except where otherwise noted, content on this work is licensed under a Creative Commons license : Attribution-NonCommercial-NoDerivs 4.0 International
ProjectDISCOVERER - DISCOVERER – DISruptive teChnOlogies for VERy low Earth oRbit platforms (EC-H2020-737183)
Abstract
Renewed interest in Very Low Earth Orbits (VLEO) - i.e. altitudes below 450 km - has led to an increased demand for accurate environment characterisation and aerodynamic force prediction. While the former requires knowledge of the mechanisms that drive density variations in the thermosphere, the latter also depends on the interactions between the gas-particles in the residual atmosphere and the surfaces exposed to the flow. The determination of the aerodynamic coefficients is hindered by the numerous uncertainties that characterise the physical processes occurring at the exposed surfaces. Several models have been produced over the last 60 years with the intent of combining accuracy with relatively simple implementations. In this paper the most popular models have been selected and reviewed using as discriminating factors relevance with regards to orbital aerodynamics applications and theoretical agreement with gas-beam experimental data. More sophisticated models were neglected, since their increased accuracy is generally accompanied by a substantial increase in computation times which is likely to be unsuitable for most space engineering applications. For the sake of clarity, a distinction was introduced between physical and scattering kernel theory based gas-surface interaction models. The physical model category comprises the Hard Cube model, the Soft Cube model and the Washboard model, while the scattering kernel family consists of the Maxwell model, the Nocilla-Hurlbut-Sherman model and the Cercignani-Lampis-Lord model. Limits and assets of each model have been discussed with regards to the context of this paper. Wherever possible, comments have been provided to help the reader to identify possible future challenges for gas-surface interaction science with regards to orbital aerodynamic applications.
CitationLivadiotti, S. [et al.]. A review of gas-surface interaction models for orbital aerodynamics applications. "Progress in aerospace sciences", Novembre 2020, vol. 119, p. 100675/1-100675/16.
URIhttp://hdl.handle.net/2117/335462
DOI10.1016/j.paerosci.2020.100675
ISSN0376-0421
Publisher versionhttps://www.sciencedirect.com/science/article/abs/pii/S0376042120300877
Other identifiershttps://arxiv.org/pdf/2010.00489.pdf
Collections
Share: