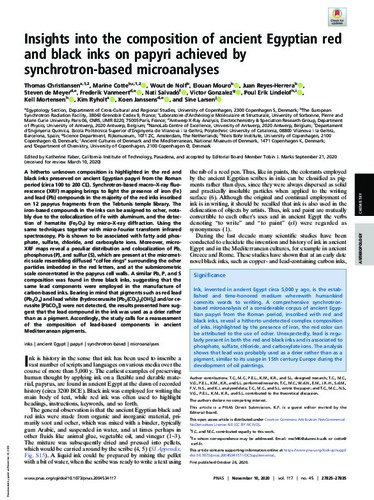 González, Víctor
Lindelof, Poul Erik
Mortensen, Kell
Ryholt, Kim
Janssens, Koen
Larsen, Sine
Document typeArticle
Rights accessOpen Access
Abstract
A hitherto unknown composition is highlighted in the red and black inks preserved on ancient Egyptian papyri from the Roman period (circa 100 to 200 CE). Synchrotron-based macro–X-ray fluorescence (XRF) mapping brings to light the presence of iron (Fe) and lead (Pb) compounds in the majority of the red inks inscribed on 12 papyrus fragments from the Tebtunis temple library. The iron-based compounds in the inks can be assigned to ocher, notably due to the colocalization of Fe with aluminum, and the detection of hematite (Fe2O3) by micro–X-ray diffraction. Using the same techniques together with micro-Fourier transform infrared spectroscopy, Pb is shown to be associated with fatty acid phosphate, sulfate, chloride, and carboxylate ions. Moreover, microXRF maps reveal a peculiar distribution and colocalization of Pb, phosphorus (P), and sulfur (S), which are present at the micrometric scale resembling diffused “coffee rings” surrounding the ocher particles imbedded in the red letters, and at the submicrometric scale concentrated in the papyrus cell walls. A similar Pb, P, and S composition was found in three black inks, suggesting that the same lead components were employed in the manufacture of carbon-based inks. Bearing in mind that pigments such as red lead (Pb3O4) and lead white (hydrocerussite [Pb3(CO3)2(OH)2] and/or cerussite [PbCO3]) were not detected, the results presented here suggest that the lead compound in the ink was used as a drier rather than as a pigment. Accordingly, the study calls for a reassessment of the composition of lead-based components in ancient Mediterranean pigments.
CitationChristiansen, T. [et al.]. Insights into the composition of ancient Egyptian red and black inks on papyri achieved by synchrotron-based microanalyses. "Proceedings of the National Academy of Sciences of the United States of America", 10 Novembre 2020, vol. 117, núm. 45, p. 27825-27835.
URIhttp://hdl.handle.net/2117/335402
DOI10.1073/pnas.2004534117
ISSN0027-8424
Publisher versionhttps://www.pnas.org/content/117/45/27825
Other identifiershttps://hal.sorbonne-universite.fr/view/index/identifiant/hal-02989351
Collections
Share: