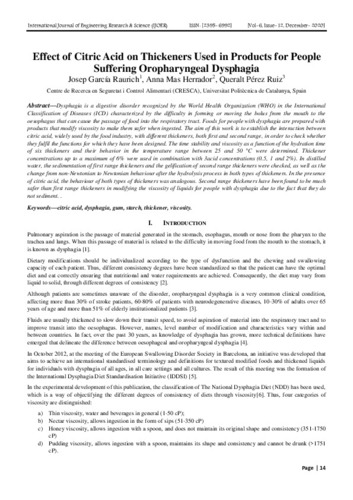 Mas Herrador, Anna
Pérez Ruiz, Queralt
Document typeArticle
PublisherAD Publications
Rights accessOpen Access
Abstract
Dysphagia is a digestive disorder recognized by the World Health Organization (WHO) in the International Classification of Diseases (ICD) characterized by the difficulty in forming or moving the bolus from the mouth to the oesophagus that can cause the passage of food into the respiratory tract. Foods for people with dysphagia are prepared with products that modify viscosity to make them safer when ingested. The aim of this work is to establish the interaction between citric acid, widely used by the food industry, with different thickeners, both first and second range, in order to check whether they fulfil the functions for which they have been designed. The time stability and viscosity as a function of the hydration time of six thickeners and their behavior in the temperature range between 25 and 50 °C were determined. Thickener concentrations up to a maximum of 6% were used in combination with 3acid concentrations (0.5, 1 and 2%). In distilled water, the sedimentation of first range thickeners and the gelification of second range thickeners were checked, as well as the change from non-Newtonian to Newtonian behaviour after the hydrolysis process in both types of thickeners. In the presence of citric acid, the behaviour of both types of thickeners was analogous. Second range thickeners have been found to be much safer than first range thickeners in modifying the viscosity of liquids for people with dysphagia due to the fact that they do not sediment
CitationGarcia, J.; Mas, A.; Pérez, Q. Effect of citric acid on thickeners used in products for people suffering oropharyngeal dysphagia. "International Journal of Engineering Research & Science (IJOER)", Desembre 2020, vol. 6, núm. 12, p. 14-24.
URIhttp://hdl.handle.net/2117/335392
DOI10.5281/zenodo.4400125
ISSN2395-6992
Publisher versionhttps://ijoer.com/assets/articles_menuscripts/file/IJOER-DEC-2020-13.pdf
Collections
Share: