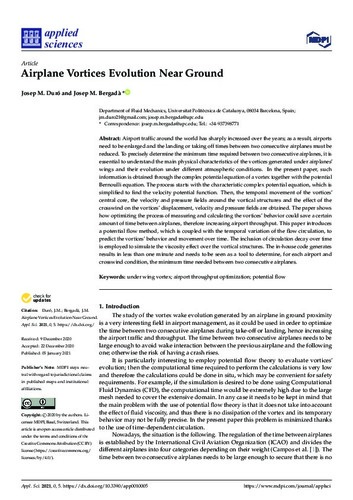 Document typeArticle
PublisherMultidisciplinary Digital Publishing Institute
Rights accessOpen Access
Abstract
Airport traffic around the world has sharply increased over the years; as a result, airports need to be enlarged and the landing or taking off times between two consecutive airplanes must be reduced. To precisely determine the minimum time required between two consecutive airplanes, it is essential to understand the main physical characteristics of the vortices generated under airplanes’ wings and their evolution under different atmospheric conditions. In the present paper, such information is obtained through the complex potential equation of a vortex together with the potential Bernoulli equation. The process starts with the characteristic complex potential equation, which is simplified to find the velocity potential function. Then, the temporal movement of the vortices’ central core, the velocity and pressure fields around the vortical structures and the effect of the crosswind on the vortices’ displacement, velocity and pressure fields are obtained. The paper shows how optimizing the process of measuring and calculating the vortices’ behavior could save a certain amount of time between airplanes, therefore increasing airport throughput. This paper introduces a potential flow method, which is coupled with the temporal variation of the flow circulation, to predict the vortices’ behavior and movement over time. The inclusion of circulation decay over time is employed to simulate the viscosity effect over the vortical structures. The in-house code generates results in less than one minute and needs to be seen as a tool to determine, for each airport and crosswind condition, the minimum time needed between two consecutive airplanes
CitationDuro, J.; Bergadà, J.M. Airplane vortices evolution near ground. "Applied sciences", 5 Gener 2021, vol. 11, núm. 1, p. 457:1-457:33.
URIhttp://hdl.handle.net/2117/335240
DOI10.3390/app11010457
ISSN2076-3417
Publisher versionhttps://www.mdpi.com/2076-3417/11/1/457
Collections
Share: