Electrodeposition of indium on W and Cu electrodes in the deep eutectic solvent choline chloride-ethylene glycol (1:2) 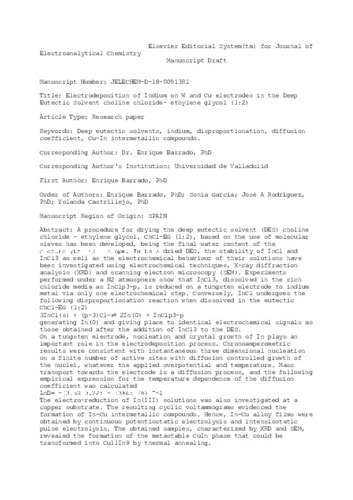 Rodríguez, Juan Antonio
Castrillejo, Yolanda
Document typeArticle
PublisherElsevier
Rights accessOpen Access
Abstract
A procedure for drying the deep eutectic solvent (DES) choline chloride - ethylene glycol, ChCl-EG (1:2), based on the use of molecular sieves has been developed, being the final water content of the electrolyte 145±5 ppm. In this dried DES, the stability of InCl and InCl3 as well as the electrochemical behaviour of their solutions has been investigated using electrochemical techniques, X-ray diffraction analysis (XRD) and scanning electron microscopy (SEM). Experiments performed under a N2 atmosphere show that InCl3, dissolved in the rich chloride media as InClp 3-p, is reduced on a tungsten electrode to indium metal via only one electrochemical step. Conversely, InCl undergoes the following disproportionation reaction when dissolved in the eutectic ChCl-EG (1:2) 3InCl(s) + (p - 3)Cl- ¿ 2In(0) + InClp - 3 p generating In(0) and giving place to identical electrochemical signals as those obtained after the addition of InCl3 to the DES. On a tungsten electrode, nucleation and crystal growth of In plays an important role in the electrodeposition process. Chronoamperometric results were consistent with instantaneous three dimensional nucleation on a finite number of active sites with diffusion controlled growth of the nuclei, whatever the applied overpotential and temperature. Mass transport towards the electrode is a diffusion process, and the following empirical expression for the temperature dependence of the diffusion coefficient was calculated. LnD = -(3.58 ± 0.22)–(3665 ± 76) T - 1 The electro-reduction of In(III) solutions was also investigated at a copper substrate. The resulting cyclic voltammograms evidenced the formation of In-Cu intermetallic compounds. Hence, In-Cu alloy films were obtained by continuous potentiostatic electrolysis and intensiostatic pulse electrolysis. The obtained samples, characterized by XRD and SEM, revealed the formation of the metastable CuIn phase that could be transformed into Cu11In9 by thermal annealing.
CitationBarrado, E. [et al.]. Electrodeposition of indium on W and Cu electrodes in the deep eutectic solvent choline chloride-ethylene glycol (1:2). "Journal of Electroanalytical Chemistry", 15 Agost 2018, vol. 823, p. 106-120.
URIhttp://hdl.handle.net/2117/335236
DOI10.1016/j.jelechem.2018.06.004
ISSN1572-6657
Publisher versionwww.elsevier.com
Collections
Share: