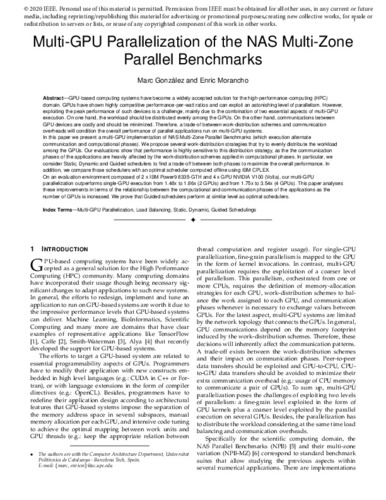 Document typeArticle
Rights accessOpen Access
Abstract
GPU-based computing systems have become a widely accepted solution for the high-performance-computing (HPC) domain. GPUs have shown highly competitive performance-per-watt ratios and can exploit an astonishing level of parallelism. However, exploiting the peak performance of such devices is a challenge, mainly due to the combination of two essential aspects of multi-GPU execution. On one hand, the workload should be distributed evenly among the GPUs. On the other hand, communications between GPU devices are costly and should be minimized. Therefore, a trade-of between work-distribution schemes and communication overheads will condition the overall performance of parallel applications run on multi-GPU systems. In this article we present a multi-GPU implementation of NAS Multi-Zone Parallel Benchmarks (which execution alternate communication and computational phases). We propose several work-distribution strategies that try to evenly distribute the workload among the GPUs. Our evaluations show that performance is highly sensitive to this distribution strategy, as the the communication phases of the applications are heavily affected by the work-distribution schemes applied in computational phases. In particular, we consider Static, Dynamic, and Guided schedulers to find a trade-off between both phases to maximize the overall performance. In addition, we compare those schedulers with an optimal scheduler computed offline using IBM CPLEX. On an evaluation environment composed of 2 x IBM Power9 8335-GTH and 4 x GPU NVIDIA V100 (Volta), our multi-GPU parallelization outperforms single-GPU execution from 1.48x to 1.86x (2 GPUs) and from 1.75x to 3.54x (4 GPUs). This article analyses these improvements in terms of the relationship between the computational and communication phases of the applications as the number of GPUs is increased. We prove that Guided schedulers perform at similar level as optimal schedulers.
CitationGonzález, M.; Morancho, E. Multi-GPU parallelization of the NAS multi-zone parallel benchmarks. "IEEE transactions on parallel and distributed systems", 1 Gener 2021, vol. 32, núm. 1, article 9162505, p. 229-241.
URIhttp://hdl.handle.net/2117/334984
DOI10.1109/TPDS.2020.3015148
ISSN1045-9219
Publisher versionhttps://ieeexplore.ieee.org/document/9162505
Collections
Share: