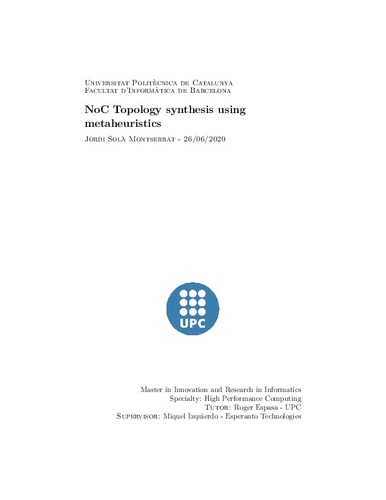 ; Izquierdo Ustrell, Miquel
Document typeMaster thesis
Rights accessOpen Access
All rights reserved. This work is protected by the corresponding intellectual and industrial property rights. Without prejudice to any existing legal exemptions, reproduction, distribution, public communication or transformation of this work are prohibited without permission of the copyright holder
Abstract
In this project, we have studied the potential of hybrid metaheuristics at synthesizing network on chip topologies. We make the case that the problem can be split in three sub-problems, each solved by a different metaheuristic algorithm. Also, we introduce modifications to these algorithms to better adapt them to their designated tasks. The first one, determining the amount of routers for the system is solved by using a local search algorithm. The second, determining each router's associated resources and position, is solved using the k-means algorithm. The final stage, interconnecting the routers and defining a routing strategy, is solved by using an Ant Colony Optimization algorithm. We also introduce our methodology for communication performance definition, used to define maximum latency, point-to-point bandwidth, and compound bandwidth cases. We show the potential of the hybrid metaheuristic approach by analysing topology synthesis results. We also showcase the discovered issues with the suggested approach, as well as propose solutions to them.
SubjectsHeuristic programming, Algorithms, Programació heurística, Algorismes
DegreeMÀSTER UNIVERSITARI EN INNOVACIÓ I RECERCA EN INFORMÀTICA (Pla 2012)
URIhttp://hdl.handle.net/2117/334935
Collections
Share: